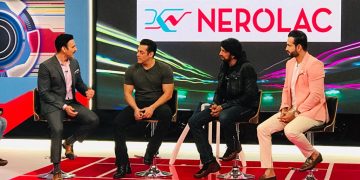 Salman Khan's younger brother Sohail and father, noted script-writer Salim Khan, are part of the consortium - Sohail Khan International LLP - that has made the investment. Mumbai, October 21 (The Times of India) – Bollywood star Salman Khan’s family has bought the Kandy Tuskers franchise in the Sri Lankan Premier League (SLPL), a tournament that saw its player draft conducted over the last two days and one that is slated to begin on November 21.

Salman Khan’s younger brother Sohail and father, noted script-writer Salim Khan, are part of the consortium – Sohail Khan International LLP – that has made the investment.

The Khans confirmed the development to TOI on Tuesday and said they “see a lot of potential” in the league.

“Given the players we have in our team, the league in general, and the passion of the fans, which are second to none, we see a lot of potential,” Sohail, the youngest of Salim Khan’s three sons, told TOI.

The youngest of the three brothers in the Khan family – Arbaaz and Salman being the elder – says “Salman will attend all the Kandy matches”.

More than anything else, Sohail seems most excited that ‘Universe Boss’ Chris Gayle is now part of his team. The SLPL player draft took place over the last 48 hours and despite all the confusion on player availabilities and the rules set in place, Khan says he’s happy with the team he’s put together.
“Gayle is obviously the Boss Man, but we have a very good team. Kusal Perera is our local icon and we also have Liam Plunkett, Wahab Riaz, Kusal Mendis and Nuwan Pradeep among others. It is a good balance of youth and experience,” he said.

The Galle franchise in the SLPL is owned by the same consortium that runs the Quetta Gladiators in the Pakistan Super League (PSL). However, it’s not clear yet as to who owns the other teams.
It is learnt that the SLP has two other India-based consortiums and one based out of Sri Lanka who have picked up the teams. Former Sri Lankan all-rounder and commentator Russel Arnold is learnt to be associated with the Sri Lanka-based consortium.

Dubai-based Innovative Production Group (IPG) was awarded the marketing and organisation rights to the SLPL in August this year with the tournament first slated to be held in September.

However, with the pandemic unrelenting, the tournament had to be postponed. IPG, for the record, is headed by Anil Mohan, an Indian based out of the UAE.

Mohan too confirmed the participation of Salim Khan’s family in the SLPL and said, “they not only add glamour to the whole event but are also committed towards the sport”.