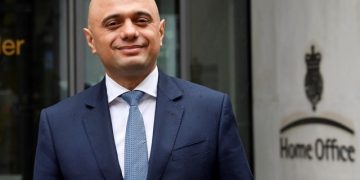 His appointment followed the exist of Home Secretary Amber Rudd on issues relating to immigration policy.

Here are some facts about the new, 48-year-old Home Secretary:

Javid campaigned to remain in the European Union during the 2016 referendum, even though a few months before the vote he said his “heart” was for Brexit. After the result, he said: “We’re all Brexiteers now.”

He was the first member of Britain’s South Asian minority to be given a full-time post in the cabinet when he was appointed culture minister in 2014. His father moved to Britain from Pakistan and worked as a bus driver in Bristol.

Before starting his career in politics, Javid worked for Chase Manhattan Bank and for Deutsche Bank, helping to build its business in emerging markets.

Javid cites the late Conservative prime minister Margaret Thatcher as his political inspiration, and has often hung a portrait of her in his ministerial office.

In 2016, Javid supported the former work and pensions minister Stephen Crabb as a candidate to replace then-prime minister David Cameron as leader of the Conservative Party in return for a promise to be appointed finance minister. Crabb’s bid ultimately foundered when he failed to secure enough votes.

Javid has shown drive, ambition and determination to get to grips with difficult subjects, Prime Minister Theresa May’s spokesperson said.

Describing Javid as one of the most experienced ministers around the cabinet table, the spokesperson said he would need those skills in his new job.

The spokesperson said no further ministerial changes were expected after Javid’s and two other appointments were announced earlier.