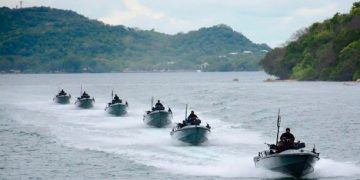 Saga of the transformation of Sri Lankan navy

Saga of the transformation of Sri Lankan navy

A sea change came about when the Rajapaksa regime recognized that the war against the Sea Tigers cannot be won if command over the sea is not established and the navy is not given its due and made pro-active, innovative and daring, says Adm (Rtd) Dr.Jayanath Colombage In his book “Asymmetric Warfare at Sea: The Case of Sri Lanka” Adm. Dr.Jayanath Colombage, former Commander of the Sri Lankan navy, who is now the country’s Foreign Secretary, tells the fascinating story of the transformation of the Sri Lankan Navy (SLN) from a small, poorly funded and non-innovative conventional fighting force to a spirited, innovative and well-armed force which, in just three years, broke the back of the intrepid and deadly Sea Tigers, the naval wing of the Liberation Tigers of Tamil Eelam (LTTE).

Adm.Colombage’s narrative begins with a candid account of the state of the SLN vis-à-vis the Sea Tigers during most the 30-year separatist war. The SLN was the underdog, suffering humiliations at the hands of the Sea Tigers, till the 2006-2009 Eelam War IV during which it emerged as the top dog to decimate the Sea Tigers.

While accounting for past failures, Adm.Colombage says that successive Lankan governments (barring the Mahinda Rajapaksa regime which came into being in 2005) saw the war against the Tamil militants as a land war to be fought principally by the army. Although the adversary was using the sea to bring in supplies, initially using the Palk Strait and eventually the wide ocean, Lankan governments did not see the need to strengthen the navy.  It was relegated to the margins and expected to little more than defend itself when attacked, not to go hunting for the adversary. The navy was not given the manpower and equipment go on the offensive. It was also trained to fight conventional battles, not maritime terrorist groups whose tactics were unconventional, cunning, ever-changing and gutsy. Due to the differences in strategy and tactics, the Sea Tigers managed to destroy 28 SLN vessels in encounters.

In contrast to the Lankan State, the LTTE was a sea-oriented group from the very beginning. Its leader, Prabhakaran, and his initial band of followers, were sea farers from the fishing community of Valvettithurai. In contrast to Lankan strategists, Prabhakaran firmly believed that to fight the Lankan forces on land, he has to have command over the sea.

Therefore, the LTTE designed and appropriately armed small boats of four different kinds. Its suicide boats used stealth technology and were high speed and armored. The Sea Tigers used RADAR to ensure accurate firing.  Besides, the  LTTE acquired ocean-going vessels which cleverly combined legitimate business and arms smuggling, and acted as “floating warehouses” on the high seas. The Sea Tigers had devised techniques to camouflage its gun-running vessels. To land its lethal cargo on the Lankan coastline, it used small boats disguised as fishing trawlers. Not short of ammo, thanks to its floating warehouses, the LTTE was able to rain artillery shells and mortar bombs to unnerve the Lankan army on the battlefront.

Not surprisingly, SLN’s lumbering vessels, including Fast Attack Craft (FAC),  were overwhelmed by the Sea Tigers’ small, fast boats, attacking in swarms. The Sea Tigers also deployed suicide boats which conventional navies do not. It staged underwater attacks using modern equipment. The Sea Tigers not only attacked Lankan harbors but in 1997, even hijacked a vessel carrying 32,000 mortar bombs ordered by the SLN from Zimbabwe. That event showed the depth of the LTTE’s penetration into the Lankan defense Establishment. In contrast, Lankan intelligence gathering lacked penetration, was piecemeal and its use was uncoordinated, Adm.Colombage says.  The air force did not undertake sea surveillance which could have helped the navy locate the floating warehouses long before September 2007 when they were located with US help.

But come Mahinda Rajapaksa as President and his brother Lt.Col (Rtd) Gotabaya Rajapaksa as Defense Secretary in 2005, a sea change occurred. The Rajapaksas decided that there would be no more talks (or a ceasefire) with the LTTE and that the war would be fought to the finish regardless of pressure from global powers and the peace and rights lobbies.

The navy had to go for the kill. The navy Commander was ordered to be unsparing with his subordinates, even as he encouraged brainstorming to get the best ideas from his staff. The  Commander personally selected officers for key positions on merit and not seniority alone.

The strength of the navy was increased from 36,000 to 54,000 and the budgetary allocation went up by more than 60% by 2007. The required equipment was ordered. Where imports of were costly, naval engineers devised alternatives. Old equipment were reconditioned to the optimal level.

Tactics underwent a sea change with the SLN imitating the Sea Tigers and using small boats to penetrate the latter’s  hideouts and confront them in swarms. Small boat production increased exponentially. The LTTE had to fight similar boats, similarly equipped and similarly-led but in much greater numbers. Guns on board Lankan vessels were enhanced through indigenous innovations.

The resources of the SLN were not only put to use, but enhanced. The Small Boat Squadron (SBS) was reactivated. The decision to acquire Offshore Patrol Vessels (OPV) – two from India and one from the US Coast Guard – and Fast Missile Vessels (FMV) from Israel, added to the reach, speed and punch of SLN vessels.

Following 9/11, the SLN used the Global War on Terror to get the US on board. The US said that it would help SLN locate the LTTE’s floating warehouses provided the SLN assured that it would not attack civilian vessels. The assurance was given. But the location of the OPVs was not easy as the LTTE had got wind of the SLN’s plan. It had stopped using satellite communication and kept off shipping lanes.

However, in September 2007, the US detected a target. But again, the SLN had an issue – the endurance of its OPVs so far from their base. SLN engineers solved such problems. The OPVs were then stationed in the calm waters of the equator to minimize wear and tear. Patrolling ships came to the equator to refuel and refit.

Meanwhile ,in Sri Lanka, the electronic surveillance network was enhanced to enable the Navy Commander and field commanders to get a real time picture. At the Defense Ministry level, the older system of various intelligence units working independently and in an uncoordinated way, was replaced by regular interactions in which information was shared and actionable intelligence distilled and communicated to the right units. All equipment required was acquired even though the West and India refused to sell or gift weapons on political or human rights grounds.

Corruption in military procurement was a major issue in the Lankan armed forces during most of the 30-year war. But an end was put to it  by the formation of the Lanka Logistics Technologies Ltd.,(LLTL) involving service Commanders and Chief of Defense Staff. The LLTL helped standardization of equipment ordered. Procurement was made a confidential process.

All these measures helped reverse the earlier situation in which the Navy was lagging behind. When the SLN was using 20 mm guns, the Sea Tigers were using 23mm. The FACs were therefore modified to carry a 30 mm gun and a 107 mm rocket launcher. 25 and 50 KW RADARs were installed. The Fast Gun Boats were equipped with modified Multi-Barrel Rocket Launchers (MBRLs) to enhance their destructive capability.

A drawback which dogged the SLN was a lack of understanding between the army and navy commanders. “But the ground commanders remained in close contact with each other and worked together enabling mutual support,” Adm.Colombage recalls. Be that as it may, the net result was the total destruction of the Sea Tigers and the elimination of its leaders.