Land value in Colombo District accelerates in first half of 2022

by Editor
in Around South Asia, India, Top Story
Reading Time: 5 mins read
1 0
A A

Given the drubbing the Bharatiya Janata Party (BJP) got in the by-elections in Rajasthan and West Bengal, results of which were announced on Thursday, its Supremo and India’s Prime Minister Narendra Modi, has to gird up his loins to face tough challenges to his supremacy in the coming months, writes P.K.Balachandran in DailyFT.

On Thursday, the BJP, which heads the Rajasthan Government, lost the by-lections for the Lok Sabha (parliament) seats in Alwar and Ajmer. It also lost the Mandalgarh State Assembly seat. The victor was the Congress led by Rahul Gandhi, both entities ridiculed and written off by the BJP and the Indian intelligentsia after the Modi’s stunning victory in the May 2014 parliamentary elections. The banished ghost has come back to haunt the over-confident BJP and its right wing extremist allies.

In West Bengal, where the BJP is hoping to capture power from the Trinamool Congress (TMC), the BJP failed to win the Uluberia Lok Sabha constituency and the Noapara assembly constituency which were up for grabs.

In both Rajasthan and West Bengal, the BJP was beaten by large margins.

Former Rajasthan Congress Chief Minister Ashok Gehlot said: “This is a precursor to not just state assembly polls later this year but also the next Lok Sabha elections. The BJP government hasn’t done anything in the past four years.”

The President of the Rajasthan Congress unit, Sachin Pilot, said that the BJP’s politics of communal and caste mobilisation involving the creation of animosities and divisions, has not worked. The youth now want jobs and farmers want relief from difficulties and not communalism or casteism.

Even before the by-elections, the Congress had won a majority of seats in local bodies such as Zila Parishads, Panchayat Samitis and Municipalities.

In West Bengal, Mamata Banerjee’s Trinamool Congress (TMC) upset the BJP’s calculations and romped home easily in both the by-polls held there. In the Uluberia Lok Sabha constituency, TMC candidate Sajda Ahmed defeated Anupam Mallick of the BJP by 474,023 votes to retain the seat for the party.

The result was more or less similar in Noapara State Assembly constituency, where TMC won by a huge margin. Only here, the party wrested the seat from the Congress which had allied with the Left in the last assembly elections and bagged this seat.

The BJP’s tactic of creating Muslim sentiment did not work in West Bengal as one of the victorious candidates was a Muslim. 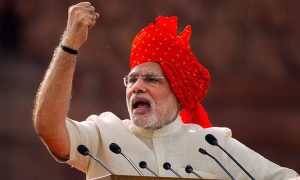 The BJP under Modi had put up a stunning performance in the parliamentary elections in May 2014. It won 282 of the 543 seats in the Lok Sabha, while the ruling Congress bit the dust getting just 44. But the BJP’s vote share was not stunning – just 31%.

But shock was awaiting the BJP government in New Delhi right at its doorstep – the Delhi State Assembly. In the Delhi State Assembly elections in February 2015, the people of the capital turned viciously against the BJP. The fledgling Aam Admi Party (AAP) crushed the BJP bagging 67 seats while the BJP got only 3. This after the BJP had won all the parliamentary seats in Delhi in the May 2014 elections.

BJP’s bad performance continued in 2015 when in the Bihar Assembly elections in November that year, the party lost to the Rashtriya Janata Dal (RJD) and the Janata Dal United(JDU) coming third in the race.

But after the RJD-JDU coalition broke on the issue of corruption, the JDU struck an alliance with the BJP to form a government.

However, the Assembly elections in the far eastern State of Assam in April 2016, brought much needed relief to the struggling BJP. Riding on local anti-Muslim and anti-minority sentiments, the BJP won 60 seats while the ruling Congress had to make do with just 26.

In February-March 2017, State Assembly elections were held in Uttar Pradesh, Uttarakhand and Goa. The BJP won decisively in Uttar Pradesh and Uttarakhand, capturing power from the Samajwadi Party in the former, and the Congress in the latter.

The BJP had actually lost in Goa but managed to form a government by striking post-election alliances to the detriment of the poll winner, the Congress.

Anti-incumbency had played a decisive role in all these elections. In Uttar Pradesh, the Samajwadi government had become a by-word for corruption and casteism. It was also pro-Muslim at a time when anti-Muslim feelings were rising in the State. Modi capitalised on this by propagating Hindu unity (Hindutwa) over-riding caste divisions. The BJP won 325 seats against 54 by the Samajwadi-Congress combine.

But a shocker was awaiting the BJP and Modi in his home turf of Gujarat. He was expected to walk over this election held in December 2017 after his Uttar Pradesh triumph. Though the BJP retained Gujarat, its tally of seats was down from 115 to 99. The Congress’ tally, on the other hand, went up from 61 to 77. The BJP’s poor performance was marked among the rural folk, the Dalits and the youth who were facing joblessness.

The right wing urban middle class oriented BJP’s model of spurring economic growth at the expense of the downtrodden has had an adverse impact on its electoral prospects.

Frustration is evident even its strongholds like Gujarat and Rajasthan. Its policy of using Hindutwa and anti-Muslim actions to garner the support of the majority Hindus has proved to be only partially effective. Election results show that the final yardstick is economic performance in so far as they help the poor and the marginalised to come up in life. It is the hoi polloi who decide electoral success or failure.

With four State Assembly and parliamentary polls due from now to May 2019, the BJP government is looking to win over farmers with a higher Minimum Support Price (1.5 times the cost of production) and a health insurance scheme through its budget for 2018-2019.

But economists say that the health insurance is too small with an allocation of only INR 20,000 million this year. And it will benefit only the insurance companies they say. In India, health care has gone into private hands with governments wilfully neglecting State hospitals. Further, funds for the insurance scheme are to be collected from taxes on the public. Therefore the poor will be paying for treatment anyway.

Other experts complain that the budget will not help spur demand and encourage entrepreneurs to borrow, investment and export. Modi’s “Make in India” project has only been an empty slogan. The sluggish economy has to be kick-started.

But time is running out for Modi. And between now and the parliamentary elections in May 2019, there will be compelling distractions like the State Assembly elections in Mizoram Chattisgarsh, Madhya Pradesh and Rajasthan.

Land value in Colombo District accelerates in first half of 2022