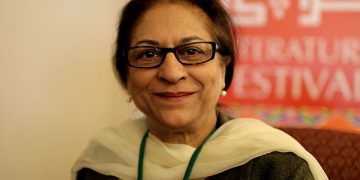 by Editor
in Around South Asia, Around The World, Pakistan, Top Story
Reading Time: 2 mins read
1 0 The family told DawnNews that Jahangir had suffered from a cardiac arrest and was subsequently shifted to a hospital, where she breathed her last. She was 66.She is survived by a son and two daughters.

Known for her outspoken nature and unrelenting pursuit for human rights — as well as for remaining undaunted in the face of extreme pressure and opposition — Jahangir will be remembered as a champion of the disenfranchised and for her services towards building a democratic and more inclusive Pakistan.

Jahangir was born in Lahore in January 1952.

She became a pro-democracy activist and was jailed in 1983 for participating in the Movement for the Restoration of Democracy, which agitated against military dictator Ziaul Haq’s regime.

She was also active in the 2007 Lawyers’ Movement, for which she was put under house arrest.

She co-founded the Human Rights Commission of Pakistan, and the Women’s Action Forum.

She received several awards, including a Hilal-i-Imtiaz in 2010 and a Sitara-i-Imtiaz. She was also awarded a Unesco/Bilbao Prize for the Promotion of a Culture of Human Rights and an Officier de la Légion d’honneur by France.

She also received the 2014 Right Livelihood Award and the 2010 Freedom Award from the International Rescue Committee.

The Chief Justice of Pakistan, Justice Mian Saqib Nisar, and other Supreme Court judges expressed deep sorrow and grief on her demise in a statement.

Chief Justice Mian Saqib Nisar arrives at Asma Jahangir’s residence to condole with her family. Khurshid Kasuri and PPP leader Barrister Aitzaz Ahsan are behind him.

They extended their heartfelt condolences and sincere sympathies to members of the grieved family while praising her services for the independence of the judiciary, rule of law and supremacy of the Constitution.

“She was an outspoken and courageous lady, and had risen to prominence by sheer dint of hard work, diligence and commitment to the legal profession,” the judges of the apex court said.

The president, in his condolence message, said Jahangir had played an “unforgettable role” for the supremacy of law, democracy and human rights.

He termed her demise as a great loss for legal fraternity.

Minister of State for Information Mariyum Aurangzeb said Jahangir’s struggle is a bright chapter in the constitutional, legal, and democratic history of Pakistan.

She said that the entire Pakistan is praying peace for Asma Jahangir’s soul.

Meanwhile, the Pakistan Bar Council announced three days of mourning across the country from tomorrow.

Condolences and tributes also poured in on Twitter as Pakistanis reacted to the shock of Jahangir’s sudden demise.

(The featured image at the top is that of Asma Jahangir)