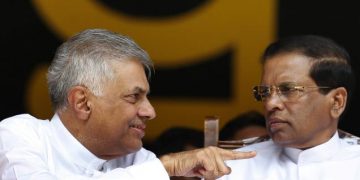 Ranil breaks silence and says will continue as PM

Ranil breaks silence and says will continue as PM Colombo, Feb 16 (newsin.asia) – Sri Lankan Prime Minister Ranil Wickremesinghe, on Friday, broke days of silence and said he would continue as the Prime Minister of the country according to the Sri Lankan constitution.

Speaking to reporters in Colombo, Wickremesinghe said he had no issues in continuing the unity government and said they would continue their work as before.

“As far as I am concerned I am continuing as the Prime Minister. Under the Sri Lankan constitution I see no reason why I should not. These are all coalition politics. Working together is not very easy. Let’s see what happens,” Wickremesinghe said.

Responding to a question of the increasing calls for his resignation from the SLFP, and from some members of the UNP Wickremesinghe said, “No one has asked for my resignation.”

Responding to a question on reports that President Maithripala Sirisena was now seeking the AGs advice in removing Wickremesinghe from the Premiership, Wickremesinghe said he would continue under the Sri Lankan constitution.

Wickremesinghe added he had accepted the people’s mandate and the results of the recently concluded Local Government Polls and said the government would work harder to fulfill the good governance mandate promised at the Jan 8 Presidential election.

He said former President Mahinda Rajapakse had spoken to him via telephone last Monday and wanted to inquire if the Premier was resigning following increasing reports that he would. Wickremesinghe had replied in the negative to which Mahinda had responded ‘That is good’.

Wickremesinghe further said that he would make way for a new leadership within the UNP as some members including himself had been with the party for 40 years. He said the party would undergo several changes and a major restructure. “The UNP has had a series of crisis. We don’t want the party to go through all that again.”

“The new leadership must play a greater role. We have a lot to discuss. There will be a major restructuring.”

Commenting on the Bond Scam and whether it had an influence on the UNPs outcome at the Local Government elections, Wickremesinghe said the Bond scam had, had an impact on the election results.

He said he, as a responsible member of the government also had to take responsibility for failing to catch those involved in the scam sooner.

Speaking on the delay in taking action against the alleged corruption caused by the Rajapakse family, Wickremesinghe said, “We have taken action against the Rajapakse family. They have been produced before courts, they have been remanded, they have been bailed out. There were 400 complaints which came against them to the police alone, excluding the complaints against them at the Bribery Commission. But I must say the people were impatient. They wanted much faster results. That also became an issue, with people asking why didnt we catch the theives? But the process is such we had to bring them before the courts, they had to be remanded and then bailed out. But the last few months were spent expediting the procedure,” he said.

He said a new law would soon be established to put up new courts with high court judges who would look into all these cases. “That will cut short the delay. But the country was impatient. This had an impact on us.”

As for Minister Champika Ranawaka’s suggestion that Mahinda Rajapakse must now be the leader of the opposition, Wickremesinghe said that this was a matter for the Speaker to decide.

The Premier further said that diplomats from US, China, India and Britain had also met him in the past week to discuss the present political situation.