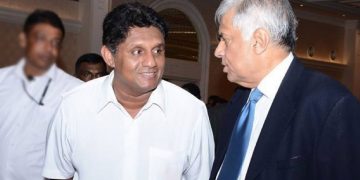 Ranil announces he will continue as PM, if Sajith wins

Ranil announces he will continue as PM, if Sajith wins

Wickremesinghe asserted that Premadasa would function as the President and he would continue to function as the Prime Minister in a future UNF government, despite many of his party members including Premadasa remaining silent on who would be their prime ministerial candidate.

Infact, Minister Harsha De Silva, recently said that the Prime Minister in a new UNF government, would be a young, strong and professional individual  would would work, with no corruption accusations against him. De Silva said Premadasa would make a strong decision on this matter, indicating that Wickremesinghe was not to be considered.

Meanwhile, Wickremesinghe, speaking to journalists and academics at the Temple Trees said the government had achieved many goals within the past four years and explained the numbers achieved.

Wickremesinghe also predicted that the country’s economic growth would reach 7.5 percent within the next five years following the development projects launched by the government.

Wickremesinghe said that following the suicide attacks, on April 21, the island’s economic growth had reduced to a great extent, but within 6 months after the attacks, the economy was showing a gain once again.

“Unlike other countries which suffer from terrorist attacks, Sri Lanka’s economy was able to turn around within 6 months. I am confident within the next 5 years, our growth can reach up to 7.5 percent,” Wickremesinghe said.

Wickremesinghe further said that if the ruling party’s presidential candidate, Sajith Premadasa wins the Presidential Elections next month, the government would aim to lead Sri Lanka into a ‘full upper economy’ status.

The World Bank, in its latest report downgraded Sri Lanka’s economic growth to 2.7 percent in 2019 but predicted a recovery next year.

The World Bank said the island’s economic growth would depend on how it ensures political stability and continues reforms to strengthen revenue.