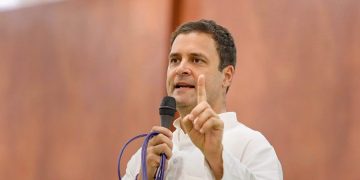 Bengaluru, January 5 (New Indian Express/newsin.asia): With Uttar Pradesh (UP) being still hostile to the Congress party, the party is said to be looking for a “safe seat” for its President Rahul Gandhi in a Congress stronghold like Karnataka.

The Gandhis have been contesting from Amethi in UP, but for some years now, the Congress has lost its hold over UP, yielding place to the Bharatiya Janata Party (BJP), the Samajwadi Party (SP) and the Bahujan Samaj Party (BSP). Thus, Amethi may not be as safe as it was before.

Bidar in North Karnataka is apparently being considered as an alternative to Amethi.

Bidar is billed as a safe seat for the Congress given the party’s impressive performance in the last assembly elections – it won five of eight assembly segments in the parliamentary constituency.

According to a Congress leader from the Hyderabad-Karnataka region, the possibility of Bidar becoming Gandhi’s second seat is being discussed among party leaders in the region.

“At a party meeting in Kalaburagi recently, a senior leader hinted that Rahul Gandhi may contest from Bidar and party workers need to start preparations,” he said.

Karnataka Congress President Dinesh Gundu Rao said: “Anything is possible. He can contest from anywhere. Why only from Karnataka?”

However, he added that he has not come across any discussion in this regard. “So far, no one has discussed the issue with me,” he said.

“We will sweep the whole of the Hyderabad-Karnataka region if Rahul Gandhi contests from Bidar. We will also have an advantage in around 20-25 seats in Hyderabad-Karnataka, Telangana and Maharashtra,” said Karnataka Congress working president Eshwar Khandre.

“There is no such proposal now, but we welcome Rahul Gandhi if he decides to contest from Bidar,” said Khandre.

Senior Congress leaders in Bidar, including Congress district unit president Basavaraj N Jabshetty, too said it will help the party if Gandhi contests from the seat.

Khandre, who dismissed the argument that Bidar is a BJP bastion, said the BJP had won Lok Sabha elections from the seat due to differences within the Congress.

“Things have changed now and the Congress will surely win the seat this time. Rahulji had played an important role in giving a special status to the Hyderabad-Karnataka region after the BJP had rejected the demand,” he said.

If not Gandhi, the Congress is said to be considering fielding Khandre, also an MLA from the district, from the seat.

It is not the first time that the Nehru-Gandhi family has looked at Karnataka for a second safe seat. In 1999, Sonia Gandhi had won from Ballari and prior to that in 1978 Indira Gandhi had contested from Chikmagalur and won.

According to sources, though the Congress is yet to decide on Gandhi’s candidature from the constituency, the developments in last few months clearly indicate that the party is doing everything it can to ensure Bidar is a safe seat for the party.

Of the five Congress MLAs from the district, two are ministers, two are heads of boards or corporations, and one is the party’s working president. The lone Janata Dal (Secular) MLA from the district is also a minister