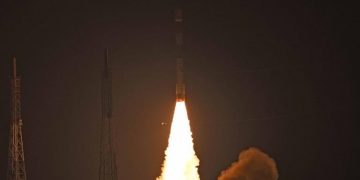 The Indian Space Research Organisation’s (Isro) workhorse Polar Satellite Launch Vehicle (PSLV) blasted off from the first launchpad of the Satish Dhawan Space Centre at 11.37 pm at the end of a 28-hour countdown.

In its 46th flight, the PSLV-C44 placed the 740-kg primary satellite Microsat-R in a 274-km polar sun synchronous orbit about 14 minutes after the lift-off, the Isro said, according to a PTI report.

Isro scientists broke into celebration as the Microsat-R, a 700kg satellite, was released marking another success story for the space agency.

The fourth stage of the rocket with co-passenger Kalamsat, a 10-CM size cube and weighing 1.2 kg students’ payload, took around 90 minutes to be moved to a higher circular orbit to establish an orbital platform for carrying out experiments.

Kalamsat is said to be the lightest satellite of India. Contributed by college students and the members of a Chennai-based organisation — Space Kidz India — Kalamsat is the first to use PS4 (the fourth stage of the vehicle) as a platform to orbit around the earth.

(The featured image at the top shows an Indian rocket launching  a military and a students-made satellite on January 24, 2019)