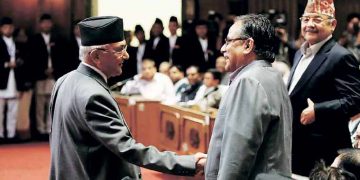 Prime Minister K.P.Oli is under siege in his own party, but he is known to be a fighter and a survivor. Colombo, November 4: The COVID-19 pandemic has so far claimed 984 lives in Nepal. As on Tuesday, the national tally of the COVID-infected was 176,500. These figures are high considering the fact that Nepal’s population is only 28 million. And the pandemic has crippled the economy. According to the World Bank, Nepal’s GDP growth in FY2020 is estimated at 1.8%, down from 7% in FY2019.

In the midst of all that Nepal is facing political instability. The ruling Nepal Communist Party (NCP) is deeply faction-ridden with one faction led by Prime Minister and Co-Chairman K.P.Sharma Oli (a traditional communist) and the other led by Pushpa Kamal Dahal alias Prachanda (an ex-Maoist). The two had merged their parties to form the NCP. The NCP they had obtained a two-thirds parliamentary majority in the 2018 elections and had also won in six of the seven provinces. But the promise of stability and a singularity of purpose rings hollow in 2020.

The NCP is reportedly heading for a split down the middle. Political instability is endemic in Nepal. If the incumbent Premier Oli quits as a result of the stand-off with his rival Prachanda, Nepal will be getting its 23 rd change in the Prime Ministership in 69 years.

Interestingly, Nepalese governments have collapsed mostly because of schisms in the ruling party. This time, the envisaged split may be brought about, not by the rebels, but by the leader himself, namely, Oli. He seems to be wanting it to clear the path to the concentration of power in his own hands. His followers say that Prachanda has not been allowing him to function as PM.

Oli has, in fact, told Prachanda that he intends to split the party in a friendly way. On Monday, he again said that he would not agree to Prachanda’s proposals for unity and threatened “big action” without specifying the action. Oli is belligerent despite the fact that 31 out of 44 members of the NCP Standing Committee are against him. He appears to be exploiting Prachanda’s habitual dithering.

In April this year, Oli had unsuccessfully tried to issue an Ordinance, according to which, for a political party to split, a 40% vote in either the parliamentary party or the party central committee would do. Getting 40% in both would not have been necessary as stipulated earlier. The Ordinance was withdrawn under public pressure. However, since parliament is not in session now, Oli could re-issue the Ordinance to force a split in the NCP.

In his quest for power, Oli had issued another Ordinance in April on the Constitutional Council. The Constitutional Council is a key agency that appoints officials at various constitutional bodies, including the country’s top anti-corruption agency. Oli’s Ordinance was meant to enable the Council to take decisions on the basis of majority vote rather than consensus. But, like the Ordinance on the political parties, this also was withdrawn under political and public pressure.

Oli’s one-upmanship resulted in a split in the NCP in December 2019. The Samajwadi Party (SP) left the ruling-coalition. The SP quit because Oli had failed to honor his promise to amend the constitution to accommodate the demands of the Madhesi community living in the southern provinces. Oli is an anti-federalist. He had said that provinces are but “administrative units” under the federal government. The SP’s leaving denied the NCP government a two-thirds majority, but it resulted in Oli’s pursuing his political and ideological agenda on the constitutional issue unfettered.

Oli has been acting completely arbitrarily, appointing ministers and ambassadors without prior consultation with Prachanda who is Co-Chairman of his party. On October, 1, Oli appointed former Finance Minister Yuvaraj Khatiwada as Ambassador to the US, and outgoing Chief Secretary Lok Darshan Regmi as Ambassador to the UK. Dahal had not been consulted on these. Again unilaterally, on October 14, Oli filled three vacant ministerial positions. Bishnu Poudel was made Finance Minister, Krishna Gopal Shrestha, Urban Development Minister, and Leelanath Shrestha, Minister of Women, Children and Senior Citizens. Ishwar Pokhrel ceased to be Defense Minister and was made Deputy Prime Minister to “take care of” the Prime Minister’s Office. Oli took over the Defense Ministry. Prachanda was kept in the dark about these.

Oli almost always has his way in administrative matters partly because he has the unstinted support of the country’s President Bidhya Devi Bhadari, who belongs to Oli’s faction in the NCP.

A key demand of Prachanda’s and others opposed to Oli is that he must comply with the decisions taken by the NCP’s September 11 Standing Committee.The Standing Committee said that the Prime Minister shall take decisions on major issues in consultation with the other Co-Chair and the party Secretariat. But Oli has been flouting the committee’s decision brazenly.

Prachanda has been persistently demanding Oli’s resignation. But Oli has refused to quit or change his ways saying that the PM has the prerogative to do act as he thinks fit. Fortunately for him, President Bidhya Devi Bhandari, who belongs to his faction of the NCP, readily signs on the dotted line. Prachanda had proposed that all issues be thrashed out at a meeting of the NCP’s Central Secretariat. But Oli has been turning a deaf ear to the demand.

Oli’s one-to-one exclusive meeting with the Indian Intelligence chief, Samant Goel, recently had created a political storm because it had a conspiratorial ring about it. Many pro-China and anti-India elements thought that Oli was going to give up his anti-India “nationalistic” credentials and spoil his image. But the criticisms did down because many saw the visit as a sign of a desirable rapprochement with India which had been alienated by Oli ‘s stand vis-à-vis China, the India-Nepal border and official political map of Nepal.

Like other Nepalese leaders, Oli has to tackle foreign interests, which are presently those of India and China. Traditionally, India has had a significant role in Nepalese politics from 1951 onwards, but in the past few years, China has become an important factor. In July this year, the Chinese Ambassador, Hou Yanqi, helped prevent a split between Oli and Prachanda. When Oli raised the border issue with India, the Indian Army Chief Gen. Naravane had said that he was doing it as somebody’s behest, by which he meant China. This had created a flutter in Nepal.

When the Nepalese felt that India was behind the 2015 economic blockade on the issue of the constitution, Oli exploited the anti-Indian sentiment. He also took concrete steps to economically integrate with China and become part of China’s Belt and Road Initiative (BRI) raising the hackles in New Delhi.

However, as on date, neither China nor India has commented on the on-going political crisis in Nepal. But India is likely to step up its diplomatic engagement with Nepal to see that events there do not get out of its hands. The visit of the RAW chief and the Indian Army chief Gen. Naravane, to be made an honorary General of the Nepalese army, are indications of that. It is unclear as to how China will respond. But eventually it will respond as it has high economic stakes in Nepal.

Oli May Weather The Storm

Notwithstanding the failures of his administration, his scant respect for the constitution, the flouting of political promises, his brinkmanship vis-a-vis India, Oli is generally expected to survive as he has chutzpah which Prachanda lacks.

Additionally, he has the support of the main opposition party, the Nepali Congress, which has taken a clear position that the five-year tenure of NCP government is the mandate of the electorate and it does not have any intention of toppling it. Though there are charges of widespread corruption against Oli, there are charges against Prachanda too. It is said that, overall, Oli’s public image as a decisive nationalistic leader is better than Prachanda’s.

Oli’s greatest strength is that he is his own man with a capacity to take bold initiatives in trying times. This is enabling him to face challenges and give the party and the country leadership.