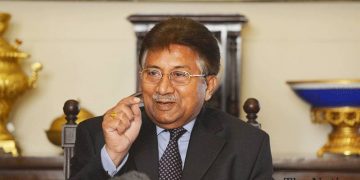 Islamabad, December 5 (Pakistan Today): Former Pakistan President Pervez Musharraf has said that he would welcome an alliance with the alleged 26/11 Mumbai attack mastermind Hafiz Saeed and the Lashkar-e-Taiba (LeT) for the general election in 2018.

Responding to a question by Aaj News channel about having an alliance with the Jamaat ud Dawa (JuD ) chief, the former military dictator  said: “So far, there has be no talks with them but if they want to be part of the alliance, I would welcome them.”

Musharraf had last month announced the formation of a grand political alliance after a consultative meeting between representatives of around two dozen political parties, including the Sunni Tehreek, Majlis-e -Wahdatul Muslimeen, Pakistan Awami Tehreek (PAT) and Musharraf’s own All Pakistan Muslim League (APML).

However, several parties dissociated themselves from Musharraf’s Awami Ittehad alliance after he announced the formation of a “grand alliance” of 23 parties.

According to media reports, two major partners of the alliance – the Pakistan Awami Tehrik and the Majlis Wahdat-e-Muslimeen – denied being part of the coalition headed by Musharraf.

Hafiz Saeed, who continues to be an influential person in Pakistan’s certain religious groups despite being an internationally (UN and US) designated terrorist, announced on Saturday that he would contest the general election in 2018.

The announcement came days after the Lahore High Court (LHC) ordered his release from house arrest.

However, the JuD chief did not disclose anything about the constituency he would like to contest from.

Though, the JuD formed Milli Muslim League (MML) in August when Saeed was detained in Lahore, the party is yet to be recognized by the Election Commission of Pakistan (ECP).

Musharraf had recently called himself as the “biggest supporter” of the LeT and its founder Hafiz Saeed.

Speaking on Pakistan’s ARY News, Musharraf said: “I am the biggest supporter of the LeT and I know they like me and the JuD also likes me.”

The former president added that he was always in favor of terrorist action in Kashmir, and the LeT and the JuD were the biggest forces to take on the Indian Army in that state.