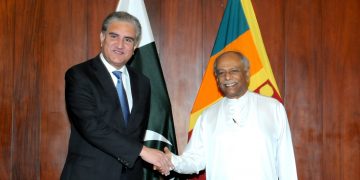 According to a press release of the Lankan Ministry of Foreign Affairs, the Pakistani Minister emphasized that the two countries having held longstanding trade ties need to reach a higher level of economic cooperation, which at present has not been fully optimized and there is much potential for economic linkages to be strengthened.

He pointed out that Sri Lanka is presently not fully utilizing its credit line of USD 200 million with Pakistan and invited Sri Lanka to make use of the opportunity, especially in the animal husbandry area, which would be beneficial for the country.

The Minister also said that both countries must look towards strengthening the Pakistan-Sri Lanka Free Trade Agreement (PSLFTA) which was the first bilateral free trade agreement (FTA) of Pakistan.

He requested the Foreign Ministry to identify potential areas of trade and investment and plan a program which would introduce the Sri Lankan business sector to visit Pakistan and form linkages with suitable counterparts in Pakistan.

Minister Qureshi commended the Sri Lankan government of its efforts in eradicating terrorism and defeating the LTTE and thereby restoring peace in the region which was of vital importance.

He further commended the Sri Lankan government’s efforts in strengthening defense cooperation and looked forward to further intelligence sharing to help each other as committed neighbours.

The Minister stated that this visit is the first to be made of a Foreign Minister to Sri Lanka following the formation of the Cabinet, after the election of President Gotabaya Rajapaksa.

Minister Gunawardena informed his counterpart that Sri Lanka is committed to continuing partnership in all possible areas of cooperation and looked forward to engaging in the fields of tourism and higher education, in addition to the growing bilateral economic partnership.

Minister Qureshi invited a delegation of Buddhist clergy from Sri Lanka to visit Pakistan and witness the beautiful Buddhist religious sites and travel the country in an effort to invigorate the growing cultural relations.