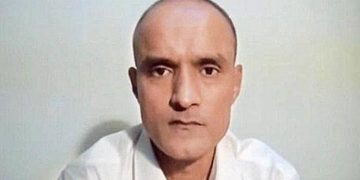 New Delhi, February 18 (Indian Express): Amid the huge face-off with Islamabad over the deadly terror strike at Pulwama, India is presenting its case at the International Court of Justice, seeking cancellation of Pakistan’s death sentence on Kulbhushan Jadhav – an Indian national.

Mr Jadhav was sentenced to death by a Pakistani military court in April 2017 on charges of espionage and terrorism. The International Court of Justice in The Hague has asked Pakistan to hold off the execution till it reaches its final verdict in the case. That verdict, India told the court today, has brought hope of justice to its 1.3 billion citizens.

Representing India before the International Court, senior advocate Harish Salve said the case rests mainly on two points – the breach of Vienna Convention by Pakistan, and “with regard to the relief to be granted”.

Accusing Pakistan of using the court to spread “propaganda” against India, Mr Salve said Pakistan is “embarrassed” to disclose its judgment in the case.

“Pakistan’s story has always been strong on rhetoric and blurred on facts. India seeks relief that trial by a military court in Pakistan fails to satisfy due processes. Jadhav’s continued custody without consular access should be declared unlawful,” Mr Salve said.

Pakistan, the former Solicitor General of India said, has steadfastly refused to disclose “specific events” in relations to which Mr Jadhav was convicted – even when it offered to extradite him to India on October 26, 2017. “India replied that it was not possessed of any material that Jadhav had committed any crime for which he could tried in India”.

“Can courts that do not rise to due standards be repository of faith?” questioned Mr Salve. Mr Jadhav, he said, was detained, confession extracted and then he was tried and awarded death sentence.

“Fundamental principles require that more serious the charge, greater are the need for safeguards. ”

Rubbishing Pakistan’s claims that Mr Jadhav was arrested on March 3, 2016, from the restive Balochistan province, India said the retired Naval officer was kidnapped from Iran, where he was running a business.

Pakistan has also contended that consular access cannot be granted to spies.

(The featured image at the top shows Kulbhushan Jadhav, the alleged Indian spy sentenced to death in Pakistan)