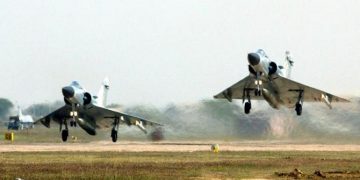 Pakistan says it has shot down two Indian aircraft, captured a pilot but India says intruders were driven back

Pakistan says it has shot down two Indian aircraft, captured a pilot but India says intruders were driven back While there has been no statement from the Indian side, news agency Press Trust of India quoted an official to say that the intruding Pakistani aircraft were driven back. the officials also denied that a pilot had been killed or missing. All pilots have been accounted for, he added.

The crash took place in Garend Kalan village of Budgam at around 10.40 am and two people are feared dead. One is reportedly a civilian but there is no official confirmation. Locals said that Indian troops surrounded the area and shot in the air to keep onlooker at bay. Visuals from the area shared on social media a crash site in flames.

The Srinagar airport has been temporarily shut.

The Pakistan Foreign Office said in a statement that on Wednesday the “Pakistan Air Force undertook strikes across Line of Control from within Pakistani airspace. This was not a retaliation to continued Indian belligerence. Pakistan has therefore, taken strikes at non-military targets, avoiding human loss and collateral damage.”

“The sole purpose being to demonstrate our right, will and capability for self defense. We have no intention of escalating, but are fully prepared to do so if forced into that paradigm. That is why we undertook the action with clear warning and in broad daylight.”

“For the last few years, India has been trying to establish what they call a new normal a thinly veiled term for doing acts of aggression at whatever pretext they wish on a given day. If India is striking at so called terrorist backers without a shred of evidence, we also retain reciprocal rights to retaliate against elements that enjoy Indian patronage while carrying out acts of terror in Pakistan.”

“We do not wish to go to that route and wish that India gives peace a chance and to resolve issues like a  mature  democratic nation.”

Meanwhile, the Indian Army said that it destroyed five Pakistani posts along the Line of Control (LoC) in Jammu and Kashmir on Tuesday night “in a befitting retaliation to firing from across the border”.

“A number of casualties” were inflicted, an Indian  defense official said.

“The Indian Army retaliated for effect and our focused fire resulted in severe destruction to five posts and number of casualties to Pak army (along LoC in Rajouri and Poonch districts)”, the Defense Ministry PRO said.

Air space over Srinagar has been closed.  Space over Amritsar and Chandigarh may also be closed down, according to reports. Commercial flights to those cities have been put on hold or diverted.

The area has been on high alert amid warnings of retaliation after India’s fighter jets crossed the Line of Control and destroyed a vast terror camp within Pakistan in a pre-dawn strike on Tuesday.

Pakistan’s Foreign Minister Shah Mahmood Qureshi spoke to US Secretary of State Mike Pompeo Tuesday and apprised him about the Line of Control “violation” by the Indian jets, a media report said.

In his telephonic conversation with Pompeo, Qureshi said India is “jeopardizing the peace in South Asia for its political purposes and elections”, state-run Radio Pakistan reported.

He said that Pakistan is desirous of peace in the region, but will not compromise on its territorial integrity.

Qureshi told Pompeo that the Indian “aggression can disturb joint efforts to establish peace in Afghanistan” as he expressed hope that US will play its role in the region.

According to Indian reports, however, Pompeo asked  Pakistan and India not to escalate the conflict but settle issues through talks.

Taliban spokesman Zabiullah Mujahid said on Wednesday that the group has not issued any press statement about the ongoing clashes between India and Pakistan.

Mujahid told Reuters that “the statement circulating about their comments on India, Pakistan clashes was fake”.

“We have not said that India, Pakistan clashes will affect the Afghan peace process. The press statement shared on social media and with news companies is fake,” he said.

Earlier a Kabul-datelined Reuters report had said that the Taliban warned on Wednesday that ongoing clashes between India and Pakistan would impact the Afghan peace process and told India to refrain from further military action after its air strike against a militant camp in Pakistan the previous day.

“The continuation of such conflict will affect the Afghanistan peace process,” Taliban spokesman Zabiullah Mujahid said in a statement.

“India should not carry any further violence in Pakistan because its continuation will affect regional security. Also the continuation of such conflict will cost a lot to India,” Mujahid said.

The Taliban issued the statement at the same time that its leaders are holding talks with U.S. officials in Qatar aimed at bringing an end to the 17-year war in Afghanistan.

(The featured image at the top show people rushing to the  site of an IAF chopper crash in Budgam, Kashmir)