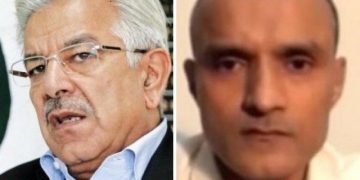 However, he added, India would not have done the same if Pakistan was in the same position, Express News reported.

In an interview, the minister said Jadhav’s case was being heard by the International Court of Justice (ICJ) and Pakistan did not want India to create an impression that he was being denied access to his family.

“We can’t make a decision in Jadhav’s case on mercy alone. We will take our national interests and security into consideration when reviewing his appeal for clemency,” he added.

“We have allowed access to Jadhav’s family purely on a humanitarian basis. However, if we were in the same place, India wouldn’t have been so kind to us.”

Sources said Jadhav’s wife and mother are expected to arrive in Islamabad on Sunday night. They will stay at the Indian High Commission. They will meet Jadhav on Monday and then a special flight will take them back to their country.

Commander Kulbhushan Jadhav alias, Hussain Mubarak Patel, a serving Commander of the Indian navy, who was working with India’s premier intelligence agency, Research and Analysis Wing (RAW), was apprehended by law-enforcement agencies on March 3, 2016 after he illegally crossed over into Pakistan.

He confessed before a magistrate and the court that he was tasked by RAW to plan, coordinate and organise espionage, terrorist and sabotage activities aimed at destabilising and waging war against Pakistan.

Jadhav was sentenced to death earlier this year; however, the International Court of Justice ordered a stay in his execution.

New Delhi has repeatedly sought access to the convicted spy but Islamabad denied the permission on the ground that consular access in cases related to spies was not applicable.