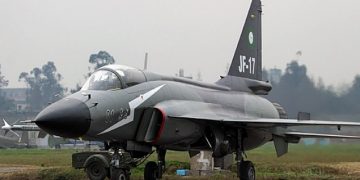 Washington, April 19 (Dawn): Pakistan is gradually reducing its dependence on American military technology and China is filling the gap, says a Financial Times report, which also warns that this shift will have geo-political repercussions as well.

The long, almost 2,000-word report notes that the shift started in the last few months of the Obama administration, when Congress blocked the sale of eight F-16 fighter jets to Pakistan.

In Islamabad, this move was seen as a confirmation of Pakistan’s fear that the United States “could no longer be relied on as their armed forces’ primary source of advanced weapons”, the report adds.

So, Pakistan shifted its focus from F-16s to the JF-17 fighter jets it is developing with China, and which is catching up with the F-16 in terms of capabilities.

The ban accelerated Pakis­tan’s efforts to shift its “military procurement away from American-made weapons towards Chinese ones, or those made domestically with Chinese support.

The report also quotes data from the Stockholm International Peace Research Institute, showing that since 2010, US weapons exports to Pakistan have plummeted from $1 billion to just $21 million last year. During the same period, those from China have also fallen, but much more slowly, from $747m to $514m, making China the biggest weapons exporter to Pakistan.

“The shift coincided with Islamabad’s growing suspicion about the closeness between the US and India, but was accelerated by the killing of Al Qaeda leader Osama bin Laden on Pakistani soil in 2011, which badly damaged relations with the US,” the report added.

US President Donald Trump’s decision to suspend $2 billion of military aid to Pakistan — announced in January — further exacerbated the situation.

Identifying one immediate impact of the move, the FT noted that US officials were “now finding that Islamabad is less responsive than usual” to their requests for support in Afghanistan.

Harrison Akins, a research fellow at the Howard H Baker Jr Center for Public Policy at the University of Tennessee, told FT: “The Trump administration’s decision … can only push Pakistan further into the arms of Beijing — especially with Pakistan’s shift from US military supplies to Chinese military supplies.”

The report also identified longer-term consequences of this development, noting that sales of weapons systems, often backed by preferential financial terms, were central to the way the US managed its network of military alliances and partnerships. But many of those countries were now buying some of that hardware from other governments, particularly China.

The Financial Times noted that Pakistan has been buying from Beijing for decades, starting after the US placed an arms embargo on it in the wake of the 1965 war with India. “After that, every time Islamabad has suffered diplomatic problems with Washington supplies of Chinese weapons have risen,” it added.

In the 1980s and 1990s, Beijing provided supplies and technical knowledge to help Pakistan develop its nuclear weapons, and in the early 1990s shocked Washington by selling its neighbour more than 30 M-11 missiles, capable of carrying nuclear warheads.

The report also noted that in the past decade, the nature of the military relationship between China and Pakistan had changed. China was now selling the “high-end systems in which the US once specialised to Pakistan’s military, and is co-developing many others”.

Jon Grevatt, an analyst at the defense research company Jane’s IHS Markit, told FT that in the last decade, China collaborated much more expansively with Pakistan. Since 2010, China has provided A-100 rocket launchers and HQ-16 air defense missile systems to Pakistan while VT-4 tanks were now being tested in Pakistan.

The report, however, focused on three weapons systems that encapsulate the new Chinese capabilities, and threaten US influence in South Asia.

The first is the JF-17 fighter aircraft.

In 2007, Pakistan flew its first two JF-17s, which cost about a third of the price paid for an F-16. Later, China also shared the designs so the Pakistan’s armed forces can build their own, and even export them.

In 2015, Pakistan used a drone to attack militants near the Afghan border, which strongly resembled a Chinese design.

In October 2016, just a month after the US refused to subsidzse new F-16s, Beijing agreed to sell eight attack submarines to Pakistan for about $5 bn — the biggest single arms export deal in the country’s history.

The report noted that submarines deal came at a time when Washington was relying on India to provide a bulwark against perceived Chinese maritime expansionism.

(The featured image at the top shows a Chinese JF-17)