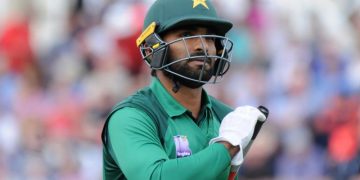 May 20 (India Today) – Pakistan middle-order batsman Asif Ali was dealt a huge personal blow when his 2-year-old daughter died fighting against cancer yesterday in a hospital in USA. The child, Noor Fatima, was battling a stage 4 cancer. Following the terrible news, Ali is expected to take a leave from Pakistan’s ongoing tour of England.

Islamabad United, Ali’s Pakistan Super League (PSL) team sent out a tweet on May 19 condoling the death: ‘ISLU family pays its deepest condolences to @AasifAli2018 on the tragic loss of his daughter. Our thoughts and prayers go out to Asif & his family. Asif is a great example of strength & courage. He is an inspiration to us.’

It was during the fourth season of the PSL that Ali had come to know about his daughter’s illness. He had also tweeted before taking Fatima to the US for treatment saying: ‘My daughter is fighting the stage IV cancer and we are taking her to US for her treatment.’

Earlier on Sunday, England beat Pakistan by 54 runs in Leeds to seal the 5-match series 4-0.England managed to box out Pakistan with their batting might throughout the series. England had chased down 340-plus totals in the 3rd and 4th ODIs earlier this week with relative ease after they defended a 374-run target in the 2nd ODI on May 11.

Jason Roy, who had hit a series-sealing ton in the 4th ODI, top-scored for England in the series with 277 runs from 3 matches.