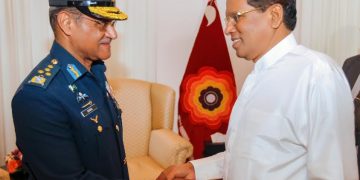 Colombo, August 9: The Commander of the Pakistan Air Force, Air Chief Marshal Sohail Aman, met the Sri Lankan President Maithripala Sirisena here on Tuesday and briefed about the current disturbances in the Kashmir Valley, according to a press release from the Pakistan High Commission.

ACM Aman, who is on a two-day official visit, appreciated the efforts of the Sri Lankan government to rid Sri Lanka of the menace of terrorism and reiterated Pakistan’s continuous and unflinching support to Sri Lanka in all forums. The two “brotherly countries” have an excellent record of defense sector cooperation, he noted.

He then briefed the Lankan President on the “current disturbances in Indian-Held Kashmir”.

The Sri Lankan President apparently did not offer any comment on this as his government has close relations with India which is a major investor and aid giver also.

On his part, President Sirisena thanked Pakistan for the continuous assistance given to Sri Lanka for training its air force personnel. He also strongly appreciated the all-out support extended by the Government of Pakistan to Sri Lanka in international forums.

The President said that Pakistan has proved to be a true friend of Sri Lanka and that the Sri Lankan government as well as the people have deep affection for Pakistan.