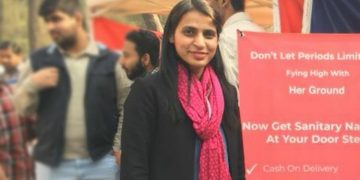 Padman has its echo in Pakistan: Startup “Her Ground” home delivers sanitary pads

Padman has its echo in Pakistan: Startup “Her Ground” home delivers sanitary pads Even as the Punjab Provincial Censor Board refused to see the Bollywood film Padman let alone certify the film for viewing, because the theme of menstrual cycles and the use sanitary pads is inadmissible in Pakistani culture, three Pakistani  startups are publicly campaigning for the use of sanitary pads by all classes.

The mahwari (period) had never been easy for A (real names cannot be revealed ). She had to use rags, which had been used by the other women of the household, and then hang them in dark, musty cupboards to dry.

Sometimes they were even used half wet. Of course, at this time of the month, school was out of the question.

Women’s menstrual cycle has always been surrounded by a zone of silence. And while it’s undergone by women nationwide, the lack of hygiene during this time is a major issue.

Sadaf Naz faced this when she was in the 9th grade, and her period began for the first time. Her mother had never told her about it, but her sister gave her a piece of used cloth — thin and worn out — and told her not to dry it on the hanging line in case their brothers would see it.

It was incidents like these that led her to plan out a startup called Her Ground, where she offers subscriptions for the home-delivery of sanitary napkins.

“I found that it is not just about accessibility to napkins. There is the problem of women not being able to buy them, but more than that most women do not even know they exist,” Naz said.

Apart from using socks, cotton wool or rolls of cloth, and then limiting all movement, many women use drastic measures to control the flow. Some use ashes and some even sand. Obviously, this points to the possibility of several medical issues.

“A number of conditions and complications can arise when using unhygienic items,” says Dr Samia Malik, former Professor of Gynaecology at the King Edward Medical University.

“These vary from infections and conditions pertaining to the urinary tract, the cervix, infertility, etc.”

Khawar Mumtaz, an expert on women’s issues, especially those related to health, points out the social ostracization of menstruating women.

“In very extreme cases women are sometimes moved to a separate quarter, and not allowed to touch food or enter the kitchen. But this is not practical because usually in rural areas it is the women who have to cook. The more common mindset is that women are dirty during this time.”

In order to address issues of accessibility and awareness among young girls, Her Ground has been holding seminars in private and government schools in Lahore and Okara.

The Association for Gender Awareness & Human Empowerment (Agahe) also has similar aims. In Muzaffargarh they have launched projects of school toilets for girls, bracketed by walls, and with sanitary napkins available.

For both these organizations, when working in schools, the headmistress and teachers are responsible for helping girls.

Qamar Iqbal from Agahe explains that the goal is helping girls improve practices of menstrual hygiene. Agahe works in collaboration with Water Aid whose project is WASH (Water, Sanitation and Hygiene).

“The WASH project’s outcome aims at targeting 21,528 children, including girls and teachers, in 50 schools,” he says.

“Also, 3,000 out-of-school girls will end up gaining access to safe and sustainable services so that they can manage their menstruation hygienically and with dignity.”

He explains that many school bathrooms used to be locked up, while some did not even have a door or a wall.

By tackling the problems of hygiene and sanitation, some of the UN’s Sustainable Development Goals (SDGs) objectives will be met. But more than this, it will ensure the presence of girls in schools.

“The drop-out rate of young girls is highest after class 5,” says Mumtaz. “This is when they begin to menstruate.”

At the minimum, the provision of sanitary napkins and a dustbin will make girls feel comfortable.

The problems with menstrual hygiene are spread across not just South Asia but even some parts of the developed world, including the UK.

The lack of access to safe menstrual hygiene management is known as ‘period poverty’.

Those living in the lower socio-economic strata are the worst of the victims. But in places such as India and Pakistan, women in especially rural areas suffer.

F*, now a mother of six, says that when she was studying back in the 1960s, there used to be a chapter on the mahwari or menstruation in her textbooks, but this was later slashed. Today there is no way in which girls are properly educated about this.

“It is pathetic how easily the government decided to ban the Bollywood film PadMan, which shows how a man supported the women in his village,” says Naz. “This would have really hit a nerve here.”

“It is so important that young girls are told about this,” says Shamshad Akhtar, a government school headmistress, whose students have been newly educated about menstruation.

“My girls felt so positive after realizing they could talk about this topic. They had so many questions.”

Akhtar feels that targeting young girls is a very intelligent way of ensuring that future generations of girls have safe and clean men­strual hygiene management.

“Tomo­rrow, they will be helping their daughters live with dignity,” she says.