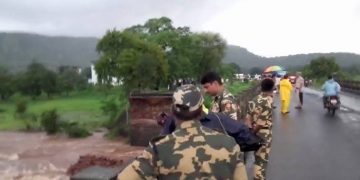 Over 22 missing after bridge collapses in Mumbai

Over 22 missing after bridge collapses in Mumbai Aug 3 (NIA) – Over 22 people are reported missing after a British era bridge collapsed on the Mumbai, Goa highway in India’s Maharashtra state on Wednesday morning due to days of heavy rains, the police said.
The bridge, more than seven decades old and a critical link to the Mumbai-Goa National Highway, crashed around 1 a.m. due to flood waters rushing into the river.
Two state transport buses with 11 passengers each were missing and there was no contact with either their drivers or the passengers, rescue officials said.
Locals said that around five to six private vehicles were also missing and they were feared to be washed away in the floods.
Around 80 rescuers and divers have been sent to the spot, the National Disaster Response Force said and a search operation is currently underway. A helicopter has also been launched by the Indian Coast Guard to help search for the missing vehicles.
Prime Minister Narendra Modi in discussions with Maharashtra Chief Minister Devendra Fadnavis earlier on Wednesday assured all help in the rescue and relief operations.
Local officials said that traffic had been diverted to a new parallel bridge and rescue teams were trying to determine whether more vehicles were missing.