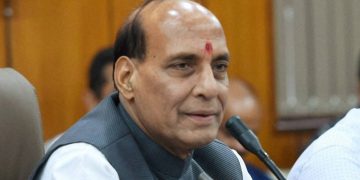 “One country’s terrorist cannot be a martyr or freedom fighter for anyone. I also speak for the entire humanity — not just for India or other SAARC members — in urging that in no circumstances should terrorists be eulogized as martyrs,” Singh said.

He also said there is need to ensure that terrorism is not glorified and patronized by any state.

This was a veiled reference to Pakistan where militants in the Indian part of Kashmir are glorified as freedom fighters or martyrs.

Singh said that nations providing support, encouragement, sanctuary, safe haven or any assistance to terrorism or terrorists, must be isolated.

“Strongest possible steps need to be taken not only against terrorists and terrorist organizations but also those individuals, institutions, organizations or nations that support them. Only this will ensure that the forces engaged in promoting the heinous crime of terrorism against humanity are effectively countered,” he said.

Clearly this was a reference to some organizations in Pakistan which openly support militancy in Kashmir.

In his speech, Pakistan Prime Minister Nawaz Sharif  skipped Kashmir and reaffirmed that his country remains committed to jointly working with all SAARC member countries in fighting terrorism.

“Let me reaffirm that Pakistan remains committed to jointly working with the SAARC member states in fighting terrorism, corruption and organized crime among others,” Sharif said.

He highlighted the successes scored by Pakistan’s military operation ‘Zarb-E-Azab’ against terrorism.

“At the national level, the remarkable gains made against the terrorists through operation Zarb-E-Azab and the effective implementation of national action plan reflect our government’s determination to eliminate the scourge of terrorism from our soil for good,” he said.

Sharif’s skipping Kashmir and Singh’s decision not to point an accusing finger at Pakistan directly on the issue of glorifying terrorism, are seen by political observers as indicators of a bid by India and Pakistan to reach some kind of a détente on Kashmir so that it does not become an Indo-Pakistan problem.