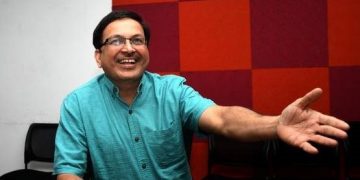 By Kanishkaa Balachandran/The Hindu
Chennai, May 23: Going down the rabbit hole of entertaining cricket videos on YouTube, the black and white reels of Indian cricket — dating back to the 1940s — stand out.

As you enter the “time capsule” in the opening slide, evergreen cinema hits of yesteryear add to the nostalgia. Jairaj Galagali, at his study in California, introduces each video in a deep baritone before playing the Films Division reel of the match/series. Galagali has no connection with the Films Division.

The IIT-Bombay graduate from Karnataka worked at ISRO before shifting in 1996 to the USA, where he’s now a director with Oracle.

In his spare time, he has painstakingly retrieved and released vintage reels of Indian Test cricket on his YouTube channel ‘Jai Galagali’. It is satiating cricket fans, more so in the absence of live sport during the lockdown.

Galagali’s hobby began around four years ago in the midst of a family crisis. As a coping mechanism, he turned to P.G. Wodehouse and cricket videos.

“Our world was shaken up. I had to keep myself sane,” he tells The Hindu over phone from California. “But I found hardly any cricket videos of the ’60s and before, which I had watched as a kid, so I decided to do something.”

That started an interesting and frustrating journey, with several international calls to retrieve precious Films Division reels from the government with permission and payment. Fortunately, they were digitised in the DVD format, but in the absence of any indexing or demarcation, identifying the reels was a gigantic task. “It was like visiting an archaeological spot where nothing shows up in order,” says Galagali.

Following bureaucratic delays, the videos were shipped to America, a moment that brought “tears of joy” to Galagali.

For background, Galagali has relied on books like A History of Indian Cricket by Mihir Bose and the Times of India archives at Stanford University.

His weekends are dedicated to meticulously crafting each video with appropriate background score, introductions, and context, which he says is vital.

“I give a social context for the younger generation watching them. I research popular music released during that era and use instrumental versions to tingle the senses,” he says.

Working on India’s 1980 Jubilee Test against England gave him the greatest satisfaction. Galagali spruced up the silent raw footage with his own commentary and sound effects of the crowd applauding and bat hitting ball at precise moments.

Galagali is overwhelmed by his growing followers, who span generations. One boy wrote to him after showing the 1964-65 Australia series to his ill grandfather. “He’s down with dementia, but the clip brought back a flood of memories,” he wrote.

A day after uploading the Madras Test of 1973, Galagali received a surprise message from the Pataudi family. “I can’t thank you enough. You brought back so many memories of my dad,” wrote the late Tiger Pataudi’s daughter Soha.

Galagali’s immediate aim is to prioritise the older decades first. “The generation that watched the likes of Nari Contractor, Subhash Gupte, Lala Amarnath is fading fast,” he explains. “This is my gift to them.”