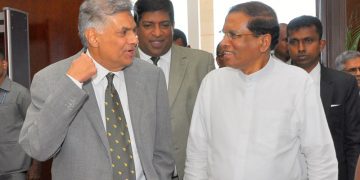 Colombo, March 22 (newsin.asia): Submission of a No Confidence Motion (NCM) against Prime Minister Ranil Wickremesinghe by the Joint Opposition Group (JO) in the Sri Lankan parliament on Wednesday has ironically put President Maithripala  Sirisena in a fix.

Sirisena’s  Sri Lanka Freedom Party (SLFP) has 41 members in parliament, the majority of whom would like to back the NCM because the party has been in daily confrontation with the Prime Minister and his United National Party (UNP) in the coalition government.

“SLFPers” as they are called in the local parlance, would like to align themselves with the JO, which is composed of a breakaway group of the SLFP and like-minded MPs led by the charismatic former President Mahinda Rajapaksa.

The 41 MPs of the SLFP are dreaming of a day when the two factions of the party unite and form an SLFP-led government getting rid of the UNP which is seen as being too Rightist and too pro-West.

For this it has to get the support of the 37 SLFP MPs still with Sirisena and 18 others from the other parties, including the UNP.

The JO is thus banking on two sources of support: the first is the wholehearted support of the SLFP led by President Sirisena and the second is the defection of 18 UNP MPs.

But both are not easy to get.

There is section which believes that President Sirisena is backing the NCM because he has been at loggerheads with the UNP led by Prime Minister Wickremesinghe and that he might make the 37 MPs currently with him support the NCM. Sirisena also knows that for the SLFP to survive as a political force in a two party situation, it has to confront the UNP and establish its own identity clearly. A prolonged alliance with the UNP will be detrimental to the SLFP’s political future. There is also a danger of the SLFP’s abandoning  Sirisena and joining Rajapaksa, thus crushing his dream of seeking a Presidential second term in January 2020.

On the other hand, there are observers who say that Sirisena would be reluctant to let down Wickremesinghe and the UNP as he owes his Presidency to them. Without the backing of the UNP led by Wickremesinghe Sirisena would not have beaten the redoubtable Rajapaksa in the January 8, 2015 Presidential election. Sirisena was the candidate of the Joint Opposition led by the UNP.

When there was tremendous pressure from the SLFP to sack Wickremesinghe from the Premiership after the coalition government’s defeat in the February 10 local bodies elections, Sirisena did not press Wickremesinghe to resign. He only suggested that Wickremesinghe step down in favor of a more acceptable person like Speaker Karu Jayasuriya.

Sirisena dropped the idea of making Wickremesinghe resign after the latter insisted that he has the constitutional right to stay in office so long as his party has faith in him. And the UNP had rallied   behind him.  UNPers had serious differences with Wickremesinghe but  they would not allow outsiders to  tell them who their leader should be.

This time too, Sirisena may not create a situation in which Wickremesinghe will be threatened. The most he would do  would be to show Wickremesinghe that the numbers are against him and that it might be better to resign.

But it is not clear at this stage that the numbers are going against Wickremesinghe. It is said that the UNP has a history of uniting when faced with a threat from outside. Unity would be called for now when outsiders (be it Sirisena or Rajapaksa) want  the party to change its leader.

UNPers want internal reforms  and a more democratic leadership but they will not allow outsiders to set their agenda.

All in all, the current political scene is confusing not the least because of Sirisena’s indecision as regards the NCM.

Sirisena is at the moment sitting on the fence, seeing which way the political wind is blowing. He has allowed his party to drift giving them neither the green, nor the red nor the amber light.