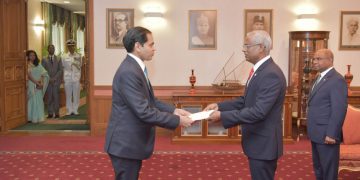 The Maldivian President congratulated the new Ambassador on his appointment and discussed ways to strengthen the age-old bilateral relations between the Maldives and India.

The President noted that the Maldives has always held India in high regard, and stressed the importance of both countries working together in the international and regional arenas.

The President further conveyed his felicitation and good wishes to the government and people of India.

Ambassador Sudhir assured that India had similar sentiments about Maldives and expressed interest in working together on areas of mutual interest.