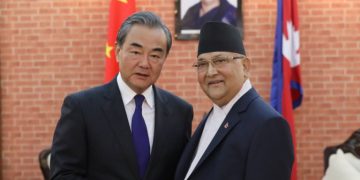 All three leaders, according to officials familiar with the meetings, presented separate wish-lists to Wang and requested that Beijing expedite projects to be funded by China.

A Foreign Ministry official who participated in the meetings said that Oli and Gyawali both told Wang that they are looking forward to hosting Chinese President Xi Jinping at the earliest, as the visit would mark a “significant” milestone in Nepal-China relations.

Both Bhandari and Oli told Wang that Nepal will not leave any stone unturned to make the visit a success, the aide said.

In response, Wang said that the Chinese president will visit Nepal at an appropriate time. “We have taken the wishes of Nepali leaders and people and our diplomatic channels will work towards them,” Wang told Oli, according to the aide.

During Monday’s meetings, all three top leaders also requested the Chinese side to expedite the projects under the Belt and Road Initiative (BRI) and urged Wang to support Nepal’s development endeavours by opening more trading points and easing bilateral trade and Chinese foreign direct investment in Nepal.

Later in the day, Gyawali and Wang held delegation-level talks, which were followed by the signing of three letters of exchange.

The two sides signed letters of exchange on the Hospital Recovery Project in Manang and 5,000 emergency shelter tents for the Home Ministry for emergency purposes.

A memorandum of understanding was also signed between the Ministry of Education, Science and Technology and the Embassy of the People’s Republic of China on a Volunteer Chinese Teachers’ Programme in Nepal.

However, high on the agenda, according to officials at the Ministry of Foreign Affairs, was the execution of various projects under the BRI framework and finalising project proposals through mutual consultations.

After signing up to China’s flagship BRI in 2017, Nepal had selected 35 projects under the initiative, but the number was later trimmed down to nine as per China’s suggestions.

All three leaders—Bhandari, Oli and Gyawali—sought support to establish Madan Bhandari University, according to the officials. China is investing billions of RMB to set up at least 100 world-class universities under the BRI framework, which spans several regions including Asia, Europe and Africa.

Madan Bhandari University is among the nine projects selected under the BRI, and Nepal has already forwarded a project proposal to China.

It was expected that the two sides would reach an agreement on the proposal during the state visit of President Bhandari to China in April. But the Chinese side stopped short of making a commitment then, according to the Foreign Ministry officials familiar with the matter.

According to another Nepali official at the Foreign Ministry who was present in the meetings, the Nepali side requested a feasibility study of the Kerung-Kathmandu railway under full Chinese grant.

Though Nepal and China have held four rounds of railway talks, both sides have yet to agree on who will fund the feasibility study of the ambitious project.

Responding to Nepal’s request to extend the Chinese rail to Kathmandu, Wang, at the meeting with Gyawali, said that China is aware of the Nepal government’s priority and is committed to expanding the cross-border railway, despite geographical difficulties.

“This is the first time Nepal has taken up the matter at the highest political level and the Chinese side has taken the request in a positive light,” a Foreign Ministry official told the Post on condition of anonymity.

Bhandari and Oli also sought China’s support for the implementation of Protocol on the Transit Transport Agreement.

Oli in 2016 signed the Transit and Transportation Agreement with China in the wake of the Indian border blockade of 2015. Nepal and China recently concluded the protocol, ensuring Nepal’s access to seven Chinese sea and land ports. But Nepali freight operators have yet to utilise the Chinese ports for the lack of a proper modality.

According to a Foreign Ministry statement, Gyawali and Wang reviewed all important aspects of bilateral relations during talks where Gyawali appreciated China’s continued support for Nepal’s socio-economic development and underlined the need to strengthen cooperation in the fields of connectivity, infrastructure, energy and education.

Wang assured Chinese support for Nepal’s development endeavours, according to the statement.

“Both sides underscored the importance of the exchange of high-level visits on a regular basis in order to develop mutual trust and confidence and to further strengthen bilateral relations,” reads the statement, which stops short of saying anything about Xi Jinping’s possible visit to Nepal.