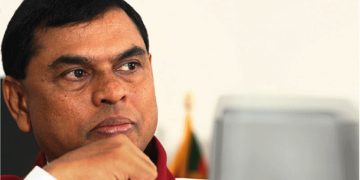 ‘Neither SLFP or UNP has a clear majority; election only solution,’ – Basil Rajapaksa

‘Neither SLFP or UNP has a clear majority; election only solution,’ – Basil Rajapaksa Colombo, Feb 18 (newsin.asia) – Basil Rajapaksa, a front liner of the Sri Lanka Podujana Peramuna (SLPP)​, ​which swept the path breaking local body elections on February 10, said here on Sunday, that ​it is vital to dissolve parliament ​and hold fresh elections as neither the ​Sri Lanka Freedom Party (SLFP) led by  President Maithripala Sirisena nor the United National Party (UNP) led by Prime Minister Ranil Wickremesinghe has a clear majority.

Speaking to newsin.asia  Rajapaks​a said that the Sirisena-led ​SLFP had approached the SLPP and asked for support to form an SLFP led government, and the SLPP had agreed to support it “for a limited period of time” ​and ​without​ ​taking ministerial posts.

However, he maintained this is not the ​ideal solution, because even if the Joint Opposition supported an SLFP government it would not have a clear majority and that would lead to political instability which in turn would adversely affect the economy.

“If an SLFP government is to be formed, the Joint Opposition will support it. It is now up to the SLFP and the President to garner the support of other MPs so that they have a clear majority,” Rajapaksa said.

​D​espite reports that Prime Minister Ranil Wickremesinghe had said that the National Unity Government would continue, the government ha​s had its own problems for some time and this would lead to instability, Rajapaksa pointed out.

“The government has to listen to the verdict of the people. We request them to hold a parliamentary election as soon as possible. The dollar has gone up. Investments are unsure. It is only right that an election is held and a strong government takes over,” Rajapaks​a said.

“Even though the SLPP is a party which won a landslide victory in the local government elections, we did not go behind the President or the SLFP. It is the SLFP that came to us, requesting us for support. ​How can the unity government continue when the ​SLFP want​s to break away? Neither the SLFP or the UNP ha​s a clear majority. The people want a change,” he asserted.

​According to the law and constitution of Sri Lanka, mid term elections to parliament can be held one and half years before the end of its term. But if the President wants to hold polls before that, parliament will have to pass a resolution seeking dissolution and fresh elections with a two thirds  majority of the entire membership of the House, not just those present and voting.

Rajapaksa said this is the first time that a party, which is only a year old, has defeated a government at a local government poll. It reflects the view of the people.

The SLPP would begin working at the local level and start a mega development drive in order to build ​up Sri Lanka’s villages.

“We will start where we had left, when Mahinda Rajapaksa was in power. Most of the infrastructure and roads had been built during the Rajapaksa regime,. Now we will ensure that everything is maintained. We will also ask the central government to establish a team to get international investors to develop our villages. Our work has already begun,” he said.

Two of the key main projects which the SLPP will work towards is establishing a renewable energy plant to provide electricity to all villages and establishing clean water facilities so that every villager and farmer will have access to clean water.

“Right now, kidney disease is like an epidemic in many areas. We will work towards minimizing the risk,” Rajapaks​a said.

​​”The government will have to support the work done at the local level as no government can succeed without the support of the local government,” he added.

(The featured picture at the top is that of Basil Rajapaksa, former Economic Development Minister and brother of SLPP leader and former Sri Lankan President Mahinda Rajapaksa)