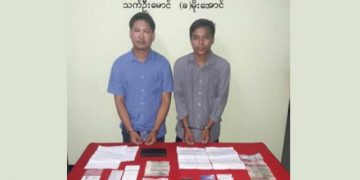 Myanmar has detained  29 journalists in 20 months since Suu Kyi came to power.

Myanmar has detained  29 journalists in 20 months since Suu Kyi came to power.

by Editor
in Around South Asia, Around The World, Myanmar, Top Story
Reading Time: 3 mins read
1 0 Yangon, December 25 (Reuters): Myanmar has detained  29 journalists in 20 months since Suu Kyi came to power. While most have since been released on bail, the frequency of arrests – along with the detention last week of two Reuters reporters – has rekindled worries among some journalists trying to cover violence in Rakhine State.

“There are too many risks being added to journalists,” said Sonny Swe, chief executive officer and co-founder of Yangon-based magazine Frontier.

“I feel that we are not moving forward, but going back in time for freedom of press and speech.”

As of December, there were five reporters, including the Reuters pair, behind bars.

Reporters Wa Lone and Kyaw Soe Oo – who had worked on Reuters coverage of the crisis in Rakhine – were arrested on Dec. 12 in Yangon.

The Ministry of Information said they had “illegally acquired information with the intention to share it with foreign media”. They face up to 14 years in prison under the Official Secrets Act.

Myanmar authorities have said the case has nothing to do with press freedom.

“There are different views, based on where you stand … There’s press freedom in Myanmar as long as you follow the rules and regulations,” Kyaw Soe, director general of the Ministry of Information, told Reuters by phone on Thursday. He declined to comment further.

A vibrant domestic media has sprung up since the transition from military rule began in 2011 and pre-publication censorship was lifted in 2012.

Nevertheless, this year Myanmar was ranked 131 out of 180 nations for press freedom by Reporters Without Borders – in the bottom third, but ahead of seven countries in the region: Cambodia, Thailand, Malaysia, Singapore, Brunei, Laos and Vietnam.

“The authorities continue to exert pressure on the media and even intervene directly to get editorial policies changed,” Reporters Without Borders said in a report this year.

Kyaw Zwa Moe, editor of Irrawaddy’s English edition, said in a commentary last week that Myanmar does have press freedom, “but with an invisible line”.

“No one can know where that line is because it’s unseen. When you touch or cross it, you’re finished,” he wrote.

Although she is Myanmar’s de facto leader, Suu Kyi is forced to share power with the military, which runs security-related ministries and the police.

After further strikes by insurgents on Aug 25, the military campaign intensified, touching off a mass exodus of Rohingya to Bangladesh, where more than 800,000 now live in refugee camps.

Some local journalists say they cannot report independently from Rakhine State due to harassment and threats from both the authorities and local people, while foreign reporters are denied access to the conflict zone.

When Moe Myint, a 29-year-old journalist for the online news site Irrawaddy heard about their arrest, his first thought was: “It could’ve been me”.

“What if the police found out that I carry any controversial document?” he said. “It’s a deliberate arrest in order to muzzle media coverage on conflicts in northern Rakhine.”

“The ethnic cleansing in Rakhine state has made the government even more intolerant,” he said.

Suu Kyi’s spokesman, Zaw Htay, declined to comment on Myanmar’s press freedom, but he told Reuters on Sunday: “Your reporters are protected by the rule of the law.”

Myanmar has denied most allegations against its security forces in Rakhine, rejecting charges by the United Nations, the United States and others that a campaign of “ethnic cleansing” was waged against the Rohingya.

The authorities have accused international media of putting out “fake news” about rights abuses in Rakhine and of “working hand-in-glove” with insurgents.

Days later MacGregor, who had written a report about alleged gang rape by soldiers, was sacked by the paper.

When contacted this week, MacGregor declined to add to the comment she made in an interview with Reuters last year, when she said it was “unacceptable that representatives of the democratically elected government would use social media and bullying tactics to suppress stories”.

Zaw Htay said at the time that he was sorry she had been fired. He said he had “just highlighted she didn’t reach other reliable sources and it led to a one-sided news article based on unreliable sources”.

Rights monitors say the erosion of press freedoms has not been limited to coverage of the Rakhine crisis.

Critics say it is used to curb criticism of the authorities and reporting of corruption.

Suu Kyi’s spokesman did not respond to further Reuters requests for comment.