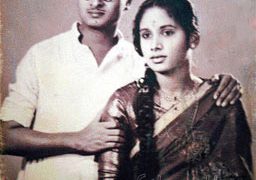 Muthuswamy Master, who invested Sinhala film music with a new sound on par with Indian films, came to Sinhala films with Sri Lanka;’s first feature film Kadawanu Poronduwa (Broken Promise) as a member of Music director R.Naranaya Iyer’s orchestra and stayed on to make a mark. The father’s attempt at making his son practice music on a baby violin resulted in young Muthuswamy enjoying the rare privilege of mastering the violin at the tender age of ten. Muthuswamy thereafter proceeded to participate in several varieties of entertainment recitals in Madras.

On January 21 1947, the first Sinhala motion picture in Ceylon Kadawuna Poronduwa (Broken Promise) was screened. R Narayana lyer, the music director of the movie, gave an opportunity for Muthuswamy to join his orchestra, when recordings were being made in India.

Narayana lyer was quick to recognize Muthuswamy’s talent as a violinist and appointed him as his assistant. It was at one of these recordings in India that S.M. Nayagam, the South Indian producer of Kadawunu Poronduwa, met Muthuswamy. Nayagam encouraged Muthuswamy to visit Ceylon, where, subsequently, his career as a music director was firmly established.

On October 20, 1952, Muthuswamy Master joined the State-owned Radio Ceylon Tamil orchestra as a violinist with a group of others. They included co-violinist G Shanmugananthan, the gatam and thambura player K.K. Atchuthan, Mirudhangam players T Ratnam and K Ganapathipillai, veena player Colendavelu and E Suppiahpillai on clarinet, all playing under the leadership of the South Indian music conductor, D.S. Manibaagavathar.

Sometime in 1953, Muthuswamy Master resigned from Radio Ceylon, accepting an invitation extended by film producer Nayagam, who had built the Sundara Murugan Navakala Sound Studios in Kandana (presently SPM Studio) in Ceylon, to be in charge of the music section at the studio.

It was in 1953 that Muthuswamy made his debut as film music director by providing music for the Sinhala movie Prema Tharangaya.

He received the award of a certificate, for the Best Music director for this achievement, from the South Indian Journalists’ Association at age 27.

Then followed Pudhuma Laylee (1953), Ahankaara Sthree, Maathalang, Hitha Honda Minihek (1975) in a series of movies, leading to the road of fame and success.

Muthuswamy who composed the background music for the hit number Pruthugeesukaraya, which was recorded in India, in Lester James Peries’s (later Dr) celebrated Sinhala movie Sandeshaya. Muthuswamy gave a break to budding vocalist H.R. Jothipala to sing this song and thereafter rocket to fame, at a time when the great Dharmadasa Walpola held sway in the local music field.

The melodies by Sunil Shantha and the background music for the movie were greatly enriched by Muthuswamy Master on par with the high South Indian standards of that time. LP record sales at Cargills topped over Rs 100,000; a comparatively tidy sum in that era.

Sometime in 1966, Muthuswamy Master played on the first electric Hammond organ imported to Ceylon, at the opening ceremony of the Sinhala movie, Okkoma Hari, produced by Wijayapala Hettiarachchi. In 1974, Muthuswamy Master received the Deepasikha award for being selected as the musician who composed music for the most number of movies.

He was instrumental in Nanda Malini’s entree to music in Daruwa Kageda in 1960.

In recognition of his contribution to Sinhala music, a directive was made by Prime Minister Sir John Kotelawala, consequent upon which Muthuswamy Master was awarded an honourary Ceylon citizenship on April 12, 1956: a historic day on which Prime Minister SWRD Bandaranaike’s first Cabinet in the 3rd Parliament of Ceylon was sworn in.

Sometime in 1958, Muthuswamy Master re-joined Radio Ceylon as a violinist. With the departure of the Tamil Orchestra Leader Manibaagawadher, who held a Temporary Residency Permit (TRP) to South India, Muthuswamy Master rose to that exalted position in the following year.

Apart from being a Carnatic music teacher, Muthuswamy Master was also a singer.

His rendition of Madhura Yaame with Sujatha Perera (later Attanayake) in the movie Sithaka Mahima was popular among the public then.

Decades later, his son Mohanraj’s identical rendition of the same number with popular female vocalist Nirosha Virajini brought about a great degree of popularity to Mohanraj among the Sinhala speaking audience.

During this era, several musicians used to be employed by Radio Ceylon/CBC/SLBC on casual basis. Notable was the popular violinist M.K. Rocksamy, a one time Saxophonist, who, unlike Muthuswamy Master, was not a Carnatic musician, but later on conducted the music direction for some 20 Sinhala movies.

The other was Gatam Vidhvaan Kandraseri Krishnan Atchuthan (Kalasuri in 1992), the Malayale from the village of Guruvaayur in Kerala, South India, who received an honourary Ceylon citizenship from Prime Minister SWRD Bandaranaike, on November 5, 1958. Morsing and Gadam recitals were innovations of Muthuswamy Master in Sinhala movies.

Muthuswamy Master continued to serve as the Leader of the Tamil Orchestra through Radio Ceylon’s conversion into the CBC/SLBC, up to the time of his retirement at age 55 on January 5, 1981 completing a total of some 24 years in that state institution.

On September 27, 1962 Muthuswamy Master and Neeliya were blessed with a son, and they named him Mohanraj, now the leader of the popular Apsaras Music Group. Thereafter three girls followed in a row: Chithrangi, Prasannavadhani and Keerthica.

It was the first time father, Muthuswamy Master and son, Mohanraj, were combinedly involved in a project of music direction for a Sinhala movie at the Ceylon Studios in Narahenpita, Colombo.

On February 15,1988 Vijaya spoke to the Master over the telephone pertaining to arrangements to be made to voice the last song by the famous Lata Walpola on the 17th. However, come February 16, on the verandah of his residence, Vijaya was assassinated.

On a Monday evening, June 27, 1988 Muthuswamy Master passed away peacefully at the age of 62. State television Rupavahini’s evening news telecast carried his obit on June 29, 1988.

At the time of his death, Muthuswamy Master had composed music for nearly 225 Tamil and Sinhala movies.