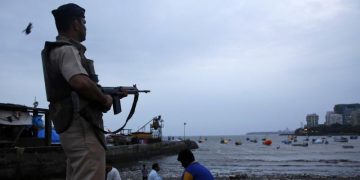 MUMBAI, Sepi 23 – Security was tightened in and around India’s financial city Mumbai on Friday after local school students reported seeing masked men with weapons and backpacks near an ammo storage facility on Thursday evening, police said.

According to initial information received by the authorities, four school students spotted a group of people dressed in uniform similar to that of Indian Army near Uran and Karanja area in Mumbai.

The men were speaking a ‘different language’, the students had informed police.

The children are being questioned by a special police team.

Following the sighting, the Western Naval Command in Mumbai issued a high alert along the Mumbai coast after the students said that the men in military uniform were spotted moving suspiciously near a Naval facility.

A search is on to trace the four men, police said.

All schools in Uran have been closed and residents have been urged not to venture outside for the time being, till the search and investigations are on.
“The situation is being closely monitored in liaison with the police. No person has been located or apprehended till now,” an Indian Defence spokesperson said.

The NDTV said that Anti-terror National Security Guard commandos have joined the massive multi-agency search operation in Uran involving the police, Maharashtra’s anti-terror squad and the Navy.
Commandos are also on standby in Mumbai, where 166 people were killed in November 2008 when landmarks in the city were attacked by 10 terrorists who came by sea.

Maharashtra Chief Minister Devendra Fadnavis tweeted that massive combing operations were on and appealed to citizens not to panic.

Uran is about 50 km from Mumbai. It is close to important locations like the Jawaharlal Nehru Port and the Bhabha Atomic Research Centre.

India has also been on guard since the terror attack in Jammu and Kashmir’s Uri on Sunday, in which 18 soldiers were killed. Since the attack, several infiltration attempts have been stopped by the army, NDTV reported.