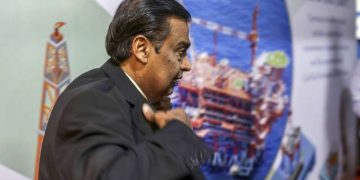 In its order dated Jan. 1, the Securities and Exchange Board of India said Reliance and its agents operated to allegedly earn undue profits from the sale of shares in Reliance Petroleum Ltd., a former unit, in both the cash and futures markets. Reliance Industries needs to pay 250 million rupees and Ambani, the chairman, is liable for the alleged manipulative trading, Sebi said.

A spokesman for Reliance said he couldn’t immediately comment on the order.

After years of investigation, Sebi observed in 2017 that Reliance, along with 12 unlisted trading houses, carried out unlawful transactions in the shares of Reliance Petroleum. They bought stock between March and November of 2007, and then the company took short positions — bets that the share price would fall — in November futures before starting to sell the stock in order to push down the price, according to Sebi.

The same year, the regulator also told the companies to return gains of 4.47 billion rupees plus interest and banned Reliance from trading futures and options on India’s equity markets for a year. Reliance had appealed the order saying they were “unjustifiable sanctions” on genuine transactions carried out in the interest of shareholders.

Reliance Petroleum merged with Reliance Industries in 2009. The petroleum entity was a listed subsidiary of the Ambani-owned firm and owned a 580,000 barrel-a-day refinery in a special economic zone at Jamnagar in the western Indian state of Gujarat, where the group has the world’s largest refining and petrochemicals complex.