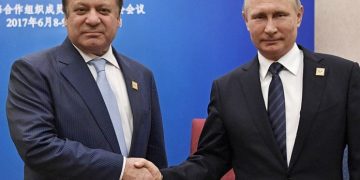 Although the Russia-Pakistan alignment was widely expected to unravel due to Moscow’s close relationship with India and historical mistrust, the Moscow-Islamabad security partnership has become a salient feature of South Asia’s geopolitical environment. The wide range of common strategic interests shared by Russia and Pakistan also suggest that the alignment is likely to survive for the foreseeable future.

The durability of the Russia-Pakistan alignment can be explained by both countries’ common desire to reduce U.S. influence in South Asia, shared strategies to resolve the war in Afghanistan and adherence to similar normative principles. As Russia has engaged in direct military cooperation with Pakistan, and defended Pakistan’s conduct in multilateral organizations, the burgeoning Moscow-Islamabad alignment presents many challenges for U.S. policymakers.

Looking at the recent past, Russia’s normalization of relations with Pakistan began in earnest with then-Prime Minister Mikhail Fradkov’s historic trip to Islamabad in 2007. The  partnership was truly bolstered significantly after both countries’ relationships with the United States deteriorated sharply in 2011. This anti-American tilt caused Russian and Pakistani policymakers to view the United States as the leading force for instability in South Asia, and accelerated bilateral efforts to contain U.S. influence in the increasingly volatile region.

This anti-U.S. containment strategy has resulted in strengthened Russia-Pakistan military cooperation. In September 2016, Russia and Pakistan held their first ever joint military exercise.  This counterterrorism drill was viewed in Islamabad as a major step towards diversifying Pakistan’s range of security partners, and reducing its dependence on the United States. Today, the Trump administration’s escalated military involvement in Afghanistan, outreach to India, and criticisms of Pakistan’s links to Islamic extremist groups, have increased the resolve of both countries to contain U.S. influence in South Asia.

In fact, ending the United States’ long-standing military intervention in Afghanistan has been the primary focus of Russia and Pakistan’s containment strategy ever since President Trump authorized expansion of the U.S. mission in August 2017. During his February 20, 2018 visit to Moscow, Pakistani Foreign Minister Khawaja Asif reiterated long-standing Russian criticisms of the .S. war in Afghanistan, by describing NATO’s military campaign in the country  as a “monumental failure.”

Pakistan has also endorsed Moscow-brokered peace talks on Afghanistan that exclude the United States. This suggests that Moscow and Islamabad are seeking to challenge Washington’s long-term leverage over Afghanistan’s political future by exclusively engaging with fellow non-Western actors on a peace settlement.

As both Russia and Pakistan have advocated similar approaches to resolving the war in Afghanistan, anti-American solidarity could translate into durable diplomatic and military cooperation between Moscow and Islamabad in Afghanistan. The contrast in approach is highly evident. For instance, President Trump’s opposition to a swift restoration of dialogue with the Taliban is offset by Russian and Pakistani policymakers who believe that Afghanistan’s security crisis can only be resolved by attaining an all-inclusive political settlement that engages the Taliban.

Russia and Pakistan’s shared belief that ISIS-Khorasan (ISIS-K) is the leading threat to Afghanistan’s security is also a common policy thread between the two countries. Although U.S. policymakers contend that ISIS-K is a declining threat, Moscow and Islamabad have repeatedly stated that the terrorist network is gaining new recruits due to the displacement of ISIS fighters from Iraq and Syria. This perception of a growing ISIS threat has also allegedly caused Moscow and Islamabad to provide the Taliban with weaponry to fight ISIS-K in northern Afghanistan.

In addition, both Russia and Pakistan  have bonded over the principle that counter-terrorism operations should not violate the sovereignty of nation-states. Pakistan stridently criticized the U.S. for breaching this norm after a November 2011 border skirmish killed 24 Pakistani soldiers. Russian Foreign Minister Sergei Lavrov’s  support for Pakistan’;s sovereignty during this critical impasse in U.S.-Pakistan relations further accelerated the improvement in relations between Moscow and Islamabad.

This normative synergy extends beyond the South Asian regional context, as Pakistan has mirrored Russia’s support for Middle Eastern governments facing popular unrest or externally-imposed economic sanctions. In spite of its close alliance with Saudi Arabia, Pakistan strongly supported Russia’s military intervention on behalf of Syrian President Bashar al-Assad, and aligned with Moscow’s soft pivot towards Qatar after the start of the Saudi-led blockade in June 2017. This suggests that Russia-Pakistan cooperation in Afghanistan could act as a prototype for collaboration between the two former Cold War nemeses in other international crises.

As Russia’s alignment with Pakistan has both strategic and normative foundations, U.S. policymakers need to develop a coherent strategy to contain the scope of this anti-American security partnership. Even though new U.S. National Security Advisor John Bolton has strident criticism of Pakistan’s ties to Islamic extremist groups, U.S. officials should not rescind Pakistan’s non-NATO ally status or label Pakistan a state sponsor of terrorism, as these hawkish polices will likely push Pakistan deeper into Russia’s geopolitical orbit.

The United States should also increase pressure on Afghanistan’s President Ashraf Ghani to follow up on his stated commitment to negotiate with the Taliban without preconditions. Progressing towards a peace settlement in Afghanistan will push Washington closer to the Russian and Pakistani positions, and potentially lay the groundwork for fruitful Washington-Moscow-Islamabad trilateral cooperation on the stabilization of Afghanistan.

Barring an unanticipated retaliation against the Russia-Pakistan alignment from India, the Moscow-Islamabad security partnership will likely continue to strengthen for the foreseeable future. It remains to be seen whether Washington will moderate its bellicose rhetoric towards Pakistan to mitigate the risks associated with the Russia-Pakistan alignment or facilitate the alignment’s consolidation by underestimating the partnership’s strength and pursuing a coercive dual containment strategy against Moscow and Islamabad.

(The featured image at the top shows Pakistan Prime Minister Nawaz Sharif and the Russian President Vladimir Putin at the Astana summit of the shanghai Cooperation Organization (SCO).)

Samuel Ramani is a D.Phil candidate in International Relations at St. Antony’s College, University of Oxford and contributor to the Washington Post, who can be followed on Twitter at samramani2