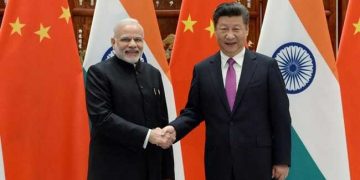 Indian Prime Minister Narendra Modi appears to have taken a leaf out of the book of former Prime Ministers P. V. Narasimha Rao and A. B. Vajpayee when he decided to go to China to have an informal, unstructured, one on one meeting with President Xi Jinping at Wuhan on April 27 and 28, writes P.K.Balachandran in South Asian Monitor.

Rajiv Gandhi broke the ice with China by his visit in 1988. That resulted in the two sides pledging adherence to the Five Principles of Co-existence worked out by Jawaharlal Nehru and Chou-En-Lai in 1954.

The push factor in Rajiv Gandhi’s case was his commitment to putting India on a path of development through liberalization and settling disputes by entering into pacts.

Rapprochement with China was part of this policy which had led to Accords relating to troubled Punjab, Assam and Sri Lanka.

Then came the regimes of P.V.Narasimha Rao and A.B.Vajpayee, which soughtdétente with China to further their liberalized economic agendas.

Narasimha Rao’s visit to Beijing resulted in the signing of the very important “Peace and Tranquility Agreement” on the India-China border in 1993. The pact opened the door for bilateral trade which was abysmally low at that time. Eventually, by 2018, China had become India’s single largest trading partner.

Vajpayee’s visit to China, which took place ten years later in 2003,obtained “equal security” for India and China on the border, and ensured the continuity of the 1993 pact. The brief Vajpayee had given to his diplomats was that they should improve bilateral relations and do whatever it took to get there. This gave room for out of the box thinking even among bureaucrats trained to follow conventions and conventional wisdom.

The net result of the efforts of these two farsighted statesmen was that, till date (even during the Doklam standoff in 2017), not a shot has been fired by either side on the 1,400 km long Sino-Indian border since 1962.

And trade has been booming. With trade came investment, albeit much later, due to reservations on the part of the Indian security agencies. According to Forbes much of Chinese investment in India is under the radar as they come via third countries. But not many would know that even public entities (like National Thermal Power Corporation) had begun to use Chinese equipment.

However, even as trade was booming (albeit heavily in favor of China as it bought raw materials from India and sold manufactured goods to it), India-China relations kept seeing setbacks at the political level.

China was supporting India’s arch rival Pakistan’s nuclear armament.China then went on to build the China-Pakistan Economic Corridor (CPEC) across Gilgit-Baltistan over which India has a dispute with Pakistan.

And above all, in 2017, China tried to build a road at a tri-junction in Doklamin Bhutan, which India considered an ‘encroachment’ which could eventually threaten Siliguri and North Bengal.

However, despite war cries from both sides, a military confrontation was deftly avoided by quiet diplomacy.

Given the possibility of war breaking out over Doklam, Prime Minister Modi has been wanting to strengthen peace and avoid war, as war would disrupt the growing India economy and harm Modi’s chances of coming back in the 2019 elections.

Therefore, at the BRICS summit in Xiamen, China, in September 2017, Modi is said to have hinted to the Chinese side that he would like to have a one-on-one meeting with Xi at the earliest.

Though the Chinese did not commit themselves, they did send positive signals to India in a general way.

On the last day of the summit, Modi and Xi met on the sidelines for their first substantive bilateral meeting since Doklam.

Commenting on the meeting, the Indian Foreign Secretary S. Jaishankar said that it was a “forward-looking conversation in which the emphasis was on peace and tranquility on border areas.”

He added that both the sides felt that there should be “closer communication between the defense and security personnel of India and China.”

Later in the day, China’s Foreign Ministry Spokesperson, Geng Shuang, said the Xi and Modi were for “sound and stable” China-India relations. Geng pointed out that Xi emphasized that China and India are “each other’s important neighbor” and should focus on “seeking common ground while shelving differences and upholding peace and tranquility in our border areas” to bring the bilateral relationship “on a right track,” under the “guidance of Five Principles of Peaceful Coexistence.”

The reference to the “Five Principles of Peaceful Coexistence” or Panchsheel was particularly interesting, as an attempt to mend ties after the military Doklam standoff.

Shedding its reserve about being in the company of China, India joined the China-led Asian Infrastructure Investment Bank (AIIB) as indeed so many Western nations had. India has many projects funded by the AIIB.

India did this despite the fact thatit is opposed to China’s One Belt One Road (OBOR) Initiative, with which the AIIB is indirectly connected.Some projects executed with AIIB funds could be part of the OBOR or could link up with OBOR.

By2030, Asia’s infrastructure needs are expected to be around US $22.6 trillion. This huge amount cannot be met by the World Bank, ADB, and EBRD alone. The AIIB’s outlay is presently US$ 5 billion but that is likely to grow. Eventually it has to be a major contributor to Asian development.

India is also part of BCIM (Bangladesh-China-India-Myanmar Economic Corridor). But unlike at the AIIB, India and China are locked in conflict in the BCIM.

At the last meeting of the BCIM, India raised the issue of access to the Chinese market. India’s trade deficit with China is huge, accounting for 45% of its overall trade deficit.

At the last BRICS summit, China did not react to Modi’s request for a private meeting. But it revised its stand on trade.Turning a new leaf,Xi Jinping has become the new messiah of free trade following China’s trade war with the US which is accused of putting up trade barriers.

At the recent economic summit at Bauo, Xi unveiled plans to further open up the economy for foreign investment and spoke passionately for free trade and decried protectionism, specially US protectionism.

This opens the door to India for selling its products in the Chinese market. In his meeting with Xi, Prime Minister Modi is expected to seek certain assurances in this regard.

The Indian Foreign Minister Sushma Swaraj did not endorse the OBOR in the joint statement issued after the Shanghai Cooperation Organization (SCO) Foreign Ministers’ meeting held in China recently. But India is likely to seek links with China in projects which are theoreticallyoutside OBOR.

These could be AIIB-funded projects. India could also revise its stand on BCIM and be more innovative and pro-active in making it a success.

In return, China could meet India’s need for investments and market access and help narrow the trade gap.

Given the finicky attitude of Japanese investors, India may also begin to prefer Chinese investments, even in high tech areas. Recently, the Indian Transport Ministry had invited Chinese companies to bid for a project to run a fast train between Chennai and Bengaluru.

The expectation is that while opposition to CPEC and OBOR will be kept up for Indian nationalism’s sake, it will not be allowed to spoil Sino-Indian economic relations, the strengthening of which might be Modi’s primary goal in the forthcoming meeting with Xi.