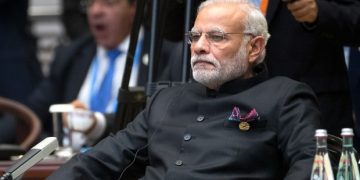 Hangzhaou, China, September 5 (PTI): In a sharp attack on Pakistan at the G20 summit here, Indian Prime Minister Narendra Modi today said “one single nation” in South Asia is spreading “agents of terror” as he asserted that those who sponsor the menace must be sanctioned and isolated, not rewarded.

“Indeed one single nation in South Asia is spreading these agents of terror in countries of our region,” Prime Minister Modi said in an apparent reference to Pakistan.

“We expect the international community to speak and act in unity, and to respond with urgency to fight this menace. Those who sponsor and support terrorism must be isolated and sanctioned, not rewarded,” Modi said in his intervention during the concluding session of the meeting of the world’s 20 strong economies.

The Prime Minister said India appreciates the G20’s initiative on combating the financing of terrorism and asserted that all countries should meet the Financial Action Task Force (FATF) standards.

“Growing forces of violence and terror pose a fundamental challenge. There are some nations that use it as an instrument of state policy. India has a policy of zero tolerance to terrorism. Because anything less than that is not enough,” Modi said.

“For us a terrorist is a terrorist,” he asserted. Modi’s remarks came a day after India called on other BRICS members to intensify joint efforts to combat terrorism.

Modi, in an apparent reference to Pakistan, had yesterday demanded “coordinated actions” by the grouping to “isolate supporters and sponsors of terror”. The Prime Minister, in his address to the Brazil, Russia, India, China and South Africa (BRICS) Leaders Meeting here, had said “terrorists in South Asia, or anywhere for that matter, do not own banks or weapons factories”.

“Clearly, someone funds and arms them and BRICS must intensify joint efforts not just to fight terror but to coordinate actions to isolate those who are supporters and sponsors of terror,” he had said, without naming Pakistan.

But the reference was clearly aimed at Islamabad — a close ally of China.

Modi’s comments at G20 come against the backdrop of escalating war of words between India and Pakistan in the aftermath of the continuing unrest in the Kashmir Valley that broke out on July 8 after Hizbul commander Burhan Wani was killed by security forces.