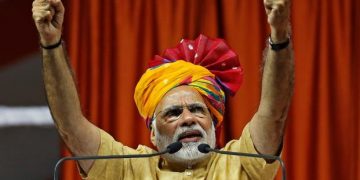 New Delhi, April 13: In the face of widespread public criticism of his silence in the face of the gang rape of an eight-year-old girl in Kathua, Jammu and Kashmir and of a minor girl in Unnao – rapes in which either policemen or politicians from the ruling BJP are implicated – Prime Minister Narendra Modi on Friday night condemned the incidents and said justice would be done.

In two tweets from his official handle, he said the incidents had shamed the country and that the guilty would not be spared.

Curiously, he refrained from referring to Kathua or Unnao by name, adding that such incidents are an attack on human values regardless of the state or area they have occurred.

“The incidents of the recent days are a challenge to social justice. The incidents which have been in public discussion the past two days would be considered shameful by any civilised society. As a society and as a country we should feel ashamed.”

In his second tweet, Modi said, “Incidents like this, wherever they occur in the country, shock our sense of humanity. I would like to reassure the nation that none of the guilty persons will be spared. Justice will be done. All of us will have to work together to end this evil within our society.”

Modi’s two tweets made no reference to the support his own party’s leaders in Jammu have extended to the men accused of raping the eight-year-old girl in Kathua, or to the alleged involvement of a BJP MLA in the Unnao rape.