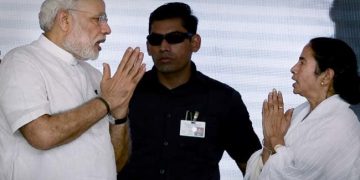 New Delhi, February 4 (NDTV): The full-blown political stand-off between Mamata Banerjee and the central government continued through the day, with the chief minister refusing to budge from her sit-in protest in the heart of Kolkata. The issue pitched Ms Banerjee to the forefront of a united opposition, whose leaders tore into the central government and took on the government on the floor of parliament and outside. The Central Bureau of Investigation, whose move to barge into the house of the Kolkata police chief and question him triggered the mega row, went to the Supreme Court, which will hear the evidence against Rajeev Kumar tomorrow.