Modi jacket is in, and it’s different from the Nehru jacket of yore

Modi jacket is in, and it’s different from the Nehru jacket of yore

by Editor
in Fashion, India, Offbeat
Reading Time: 3 mins read
17 1
A A

The “Modi jacket” is sleeveless, extends down below the belt and rises at the neck to form a stand-up collar. Khadi staff say they are selling at least 100 every day,. Modi’s supporters call it proof of the prime minister’s popular appeal. Critics call the jacket a fraud.

“It’s not a Modi jacket,” says Ashok Swain, a professor at Uppsala University in Sweden, who frequently makes his displeasure with the prime minister known on Twitter. “It’s the same style that Jawaharlal Nehru made popular. It’s exactly the same. Modi just changed the color.”

Modi is unique among Indian leaders for his devotion to Hindu nationalism, a movement that has vied for more than a century to reshape the idea of India. Where Nehru, the country’s first and most influential prime minister, saw a blended nation of idiosyncratic religious and cultural beliefs, Modi sees a Hindu nation, stifled for too long by Delhi’s secular elites.

Battles over the prominence of Nehru have raged in India these past five years. Modi’s party has announced it is building a museum to “all prime ministers” at a site previously reserved for Nehru’s memorial and library. They have burnished the legacies of other founding leaders such as Sardar Patel – the subject of the largest statue in the world, unveiled by Modi in October. Two years ago, a government panel in Rajasthan almost erased Nehru from Indian textbooks altogether.

Now the Nehru-cum-Modi jacket has found itself drafted into the wider fight over Indian history and identity. 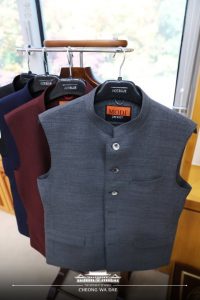 South Korea’s president, Moon Jae-in, unknowingly waded into the dispute a few weeks ago, when he tweeted a picture of himself wearing a “Modi vest” the Indian leader had sent him.

“It’s really nice of our PM to send these but could he not have sent them without changing the name?” replied Omar Abdullah, a former state leader from an opposition party.

It was really nice of our PM to send these but could he not have sent them without changing the name? All my life I’ve known these jackets as Nehru jackets & now I find these ones have been labeled “Modi Jacket”. Clearly nothing existed in India before 2014.

“All my life I’ve known these jackets as Nehru jackets & now I find these ones have been labelled ‘Modi Jacket’,” he added. “Clearly nothing existed in India before 2014 (the year Mr Modi came into power)’.”

‘We used to call them ladies’ jackets’

At Khadi, sales assistant Yogesh says the two jackets are different. Modi’s version has no collar, he insists, and its pockets are diagonal. “Before Modi, we used to call them ladies’ jackets,” he adds furtively.

Next door, the manager of men’s tailor SM & Sons, Ravinder Bawa, disagrees. “This is one of the oldest jackets,” he says. “Modi’s is more or less the same, but he wears bright colours, while Nehru wore cream and white.”

Nehru himself only made popular a garment that had been worn for hundreds of years, originating in the courtly dress of India’s Mughal era. The stand-up Nehru collars were briefly a sensation in the west in the 1960s, after the newly enlightened Beatles began sporting them. Sammy Davis Jr claimed to own more than 200 in his wardrobe.

In Bawa’s store, they still call it a Nehru jacket. “But nobody asks for those anymore,” he says. “They ask for Modi jackets only.”

One authority on the subject is Bipin Chauhan, whose menswear store in Gujarat, JadeBlue, has been designing Modi’s clothes since 1989.

“It’s been around for a long time,” he says, but trained eyes can spot the difference. “Nehru used to wear his shorter and a bit tighter. This Modi jacket is longer and more comfortable. It’s a businessman’s jacket. It also covers your tummy better, because men in India get a bit of a tummy after age 40.”

“The main thing is that the Modi jacket gives you a power feeling,” Chauhan says. A power feeling? “Only those who wear it can understand,” he says.