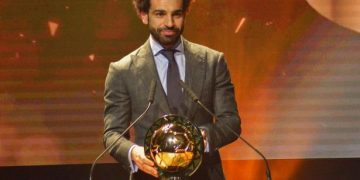 Memorable day for Salah and Egpyt

Memorable day for Salah and Egpyt

by Editor
in Around The World, Football, Sports, World
Reading Time: 1 min read
3 0 Liverpool striker Mohamed Salah bagged the African Footballer of the Year title for the second consecutive year on Tuesday, at the Confederation of African Football’s awards ceremony in Dakar.

CAF is the governing body of African Football and was founded in 1957. The founding members are Egypt, Sudan, Ethiopia, and South Africa.

Salah netted 44 goals in all competitions for Liverpool last season and has continued to perform so far this season.

“This award is very big for me, I love it because I saw it when I was young and I always had a dream to win it one day,” Salah said as he collected his trophy at the ceremony in the Senegalese capital.

It was a memorable day for Egypt as not only did Salah bring pride to the nation but it was also announced that Egypt will host the 2019 Africa Cup of Nations between June 15 and July 13, 2019.