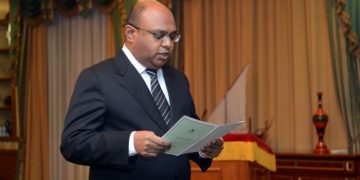 Male, February 5 (Avas):  The Maldivian military broke into the Supreme Court Monday night even as the Chief Justice Abdulla Saeed appealed to the public to protect the court and its judges, and the daughter of former President Maumoon Abdul Gayoom asked the court to revoke the State of Emergency declared earlier in the day.

The news of the military break in was tweeted by Maldivian Judiciary handle at 22:26 hrs Monday.

Following a conversation between him and Chief Justice Saeed, former Attorney General Hsunu Suood tweed  that the judge had appealed to the people to protect the judges as well as the court after President Abdulla Yameen declared a State of Emergency earlier in the day.

Saeed requested from the acclaimed lawyer to pass his message to the people of Maldives in the hope that the people would protect the apex court.

The island nation has been plunged into fresh political turmoil after the Supreme Court on Thursday ordered the immediate release of jailed political leaders including self-exiled former president Mohamed Nasheed.

More than three days after the Supreme court ordered the immediate release of as many as nine political prisoners, government has thus far refused to comply.

President Yameen declared a State of Emergency state for 15 days and suspended as many as 20 constitutional rights for the duration along with the Criminal Procedure Act and several articles of the judicature Act.

The announcement was read out by the legal affairs minister Azima Shakoor on state television, flanked by Attorney General Mohamed Anil.

The constitutional rights suspended President Yameen and the stripping of the Supreme Court of all authority have effectively quashed any moves by the opposition to impeach him.

The judicature Act articles suspended by the President further constricts the powers of the top court and its jurisdiction to overrule the High Court.