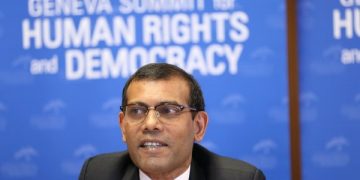 In a brief but dramatic and unexpected statement issued Thursday night, the Supreme Court said the prisoners were free until fair trials could be conducted without undue influence.

“After considering the cases submitted to the Supreme Court about violations of the Constitution of the Republic of Maldives and human rights treaties that the Maldives is party to, to conduct politically motivated investigations followed by trials where prosecutors and judges were unduly influenced, the Supreme Court has found that these cases have to be retried according to legal standards,” it said.

The Supreme Court also terminated its contentious anti-defection ruling, which stated that floor-crossing lawmakers would be ousted from the parliament.

The court overturned the Elections Commission’s declaration last year that 12 lawmakers had lost their seats in parliament.

A spokesman for the Maldivian Democractic Party welcomed the Supreme Court decision, saying it was “a death knell for President Yameen’s corrupt and criminal dictatorship.”