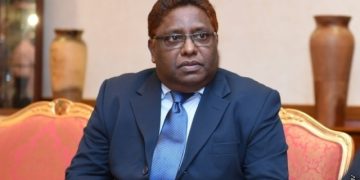 Male, February 12 (newsin.asia): The Maldivian police have recovered US$ 215,000 and MVR 150,000 from a bag belonging to the arrested Supreme Court Judge Ali Hameed Monamed.

A police update said on Monday that former President Maumoon Abdul Gayoom had in various ways aided the family of Justice Ali Hameed.

The police further said that they have obtained documentary evidence of a purchase of a flat with money obtained from bribes. They  confirmed that a prominent Maldivian business man had loaned USD 2.4 million to the family of  Judge Ali Hameed.

“Additionally, critical evidence and information crucial to the investigation has been recovered from a black suitcase which was removed from Endherimaage, Maafannu (the residence of Former President Maumoon Abdul Gayoom),” the release said.

“We have in our possession now documentary evidence from the recently found suitcase that Ahmed Faris Maumoon attempted to influence the Judiciary. The suitcase was retrieved from the home of an employee of former President Maumoon Abdul Gayoom. This employee is currently in Police custody,” the release added.

“There is further documentary evidence that confirm suspects in this case have purchased expensive overseas properties that do not correspond to their legal incomes,” it further said.

Police are on the look out for Member of Parliament Ilham Ahmed.