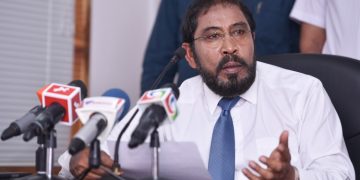 Male, February 28 (newsin.asia): The Maldivian authorities have a recording of a TV interview with the opposition Jumhoory Party leader Qasim Ibrahim in which he says that “we issued the Supreme Court order of February 1,” thus substantiating the government’s charge that the opposition had influenced the Supreme Court to issue an order, which, if implemented, would have broken the back of the Executive branch of the State and thrown the country into chaos.

Police spokesman Senior Superintendent Ahmed Shifan said on February 12 that an attempted coup in the Maldives was being investigated, after revealing that bribes of more than US$ 2.7 million were paid as part of a plot to overthrow the government of President Abdulla Yameen.

The government has been describing this as an “attempted judicial coup”.

Shifan told reporters said that US$260,000 had been found in a bag belonging to Supreme Court Justice Ali Hameed, one of two judges arrested after Yameen declared a State of Emergency on February 5..

Shifan also said a “Maldivian business” gave a US$ 2.4million loan to Ali Hameed’s family, alleging that the money was used to buy an apartment.

A source in the Maldivian Presidential office told newsin.asia that Qasim Ibrahim’s “influence in the judiciary has long been suspected.”

The source further said that it is believed that the Maldivian business which gave US$ 2.4 million as loan assistance to the judges was Qasim’s Villa Group of companies.

Meanwhile, the Maldivian Inland Revenue Authority (MIRA) started  taking action against those tourist facilities and tourism related businesses operating under Law N0 2/99 (Maldives Tourism Act), which have defaulted on rent, taxes and fines due under both tax  laws and respective agreements with the Government of Maldives.

MIRA is now taking enforcement measures against those parties to recover the unpaid monies owed to the Government.

With respect to aforementioned properties, the said five companies owe to the Government approximately US$ 200 million as rent under Lease Agreements, Fines, Goods and Services Tax, Green Tax and Withholding Tax.

Whilst the bank accounts of the said five companies remain frozen by the way of enforcement measure taken by MIRA, these companies are engaging in tax evasion activities and conducting their businesses in a manner to facilitate tax fraud. Reportedly, these businesses are also conducted abroad, including Germany.

Qasim Ibrahim had earlier attempted to overthrow the lawfully elected government by bribing members of the Maldivian Parliament.  He was charged and subsequently convicted by the Criminal Court and sentenced for 3 years of imprisonment

However, Qasim Ibrahim was given permission to go to Singapore for medical treatment. But after treatment he did not come back. Instead he went to Germany from where he has been trying to manipulate the judiciary to get his sentence cancelled.

Indeed the February 1 ruling of the Supreme Court cancelled Qasim Ibrahim’s sentence along with  those of eight others. However, later, after the arrest of the Chief Justice Abdulla Saeed and Judge Ali  Hameed, the court reversed the judgment.