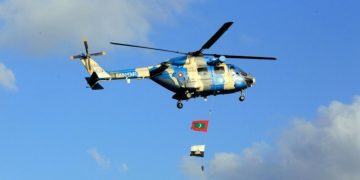 Male, April 4 (Mihaaru/AVAS):  Indicating the fragile nature of the relations between the Maldives and India, the Maldivian government is planning to return one of the two Coast Guard helicopters gifted by India. No reasons have been formally stated, but reports in the Maldivian media say that the Abdulla Yameen government is objecting to the constant presence of Indian military personnel in sensitive areas.

The Indian aircraft and personnel are stationed as per a Letter of Exchange between the two countries. The Maldivian government feels that it has no control over the Indian personnel.

It is learnt that the Maldivian Ambassador in Sri Lanka Mohamed Hussein Shareef ,will be in New Delhi shortly to attend a Colombo Plan meeting there and that he is likely to discuss with the Maldivian envoy in India further diplomatic moves in regard to the stand off.

India first gifted a helicopter to the Maldives military in 2010 during the Presidency of Mohamed Nasheed. The second one was  gifted in May, and is operating from the Laamu Atoll Kadhdhoo domestic airport.

Both the choppers are currently being piloted by Indian Navy officers, though there is a scheme to give training to locals to fly them.

The Indian pilots’ stay in the archipelago is facilitated by a “Letter of Exchange” between the two governments which is renewed every two years.

Mihaaru found that the latest agreement had expired two months ago. Sources said that the Maldives government has stalled the renewal of the agreement despite numerous requests by India.

The government is dragging its feet because it wants to send one of the choppers back to India, the sources added.

The Indian High Commission in Male has refused to comment.  And Defense Minister Adam Shareef said that a decision over the chopper in Gan is yet to be made.

But Defense Minister Shareef denied that the expenses were a factor.

The two military helicopters gifted by ndia are mainly used to locate missing sea vessels and execute search and rescue missions and  carry critically ill patients from the atolls to Male.

No Response to Call for Substantial Explanation

According to AVAS, The Indian government has requested from its Maldives counterpart  a “substantial explanation” for refusing to extend the agreement for another two years.

However the Times Of India reported that the Maldivian  government had not responded to the Indian request.

As per a high-ranking official of the Maldives said that the military is seeking local sea transport and surveillance aircraft instead of helicopters.

AVAS further said that “attempts to get from both the Maldivian government and military were unsuccessful. But it has been revealed the local government as well as the military have expressed concern over the constant presence of helicopter technicians dispatched from India at local campsites.”