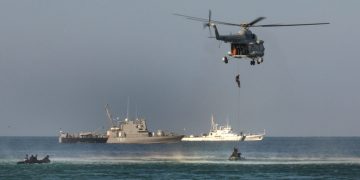 New Delhi February 27 (newsin.asia): Maldives will not be participating in the eight-nation, India-led naval exercise Milan this year because all wings of the Security Forces are  required to be in station because of the existence of a State of Emergency at home, the Maldivian Ambassador in India, Ahmed Mohamed said on Tuesday.

However when the Indian naval chief Sunil Lanba was asked about it he said that Maldives had been invited but it had declined to participate giving no reason.

India and the Maldives have been at odds over the Declaration of Emergency by the Maldivian President Abdulla Yamin on February 5 and the incarceration of the Chief Justice, Abdulla Yameen and fellow judge Ali Hameed ,and ten other top opposition leaders including former President Maumoon Abdul Gayoom. Former President Nasheed was sentenced to 13 years in jail but he is now a fugitive in the UK.

India recently wanted the Maldives to withdraw the Emergency, and release prisoners as per the now over ridden Supreme Court order of February 1.

Meanwhile, former President Nasheed complicated matters by brazenly asking India to intervene militarily as it did in  1988.