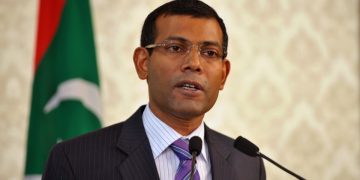 “The opposition leaders are meeting in Colombo to work out strategies to legally topple Yameen,” one MDP member told AFP. The MDP is part of a new coalition opposed to Yameen, called the Maldives United Opposition (MUO), formed in London in June where Nasheed sought asylum while on leave from prison for medical treatment.

The Male-based news outlet Maldives Independent said Nasheed and two other seniors of the MUO arrived in Sri Lanka on Wednesday. “The website report is accurate,” a person close to the MDP told AFP. There was no immediate comment from the Maldivian government, but the administration has consistently maintained there is a plot to oust the president.

In June, Yameen’s former deputy Ahmed Adeeb was jailed for 15 years on a charge of plotting to assassinate the president — part of a sweeping crackdown on opponents, most of whom are in jail or exile.

The international community has mounted fierce criticism against what they say is Yameen’s unlawful jailing of Nasheed and other opponents.

Nasheed, the country’s first democratically elected leader who came to power in 2008, was forced to step down in February 2012 following a mutiny by police and the military. In March 2015 he was jailed for 13 years on a charge of terrorism for having a judge arrested when he was president three years earlier.

US Secretary of State John Kerry warned in May last year that democracy in the Maldives was under threat, saying Nasheed had been “imprisoned without due process”. The simmering political unrest in the nation of 1,192 tiny coral islands has dented its image as a paradise for upmarket tourists.