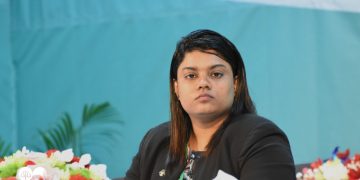 by Editor
in Around South Asia, Around The World, Maldives, Top Story
Reading Time: 2min read
1 0 Male, February 2 (newsin.asia): The Maldivian government has raised with the Supreme Court Chief Justice its concerns about the court’s  order to immediately release all top political leaders who had been sentenced to various term of imprisonment.

he met Chief Justice Abdullah Saeed and told him that it would be  problematic to release detainees given the nature of their offences which are terrorism, corruption, embezzlement, and treason.

The Attorney General stated that the Administration has highlighted concerns over the consequences of the immediate implementation of the court’s ruling.

But Anil assured the media that the government is working with all relevant authorities to speedily implement the Supreme Court ruling.

He further revealed that the Chief Justice had advised the Administration to proceed with implementation “observing due process.”

In this regard, the Attorney General said that the Prosecutor General Aishath Bisham  is in the process of examining the cases to determine the best way to proceed with the implementation of the Supreme Court’s ruling.

The Prosecutor General would present her recommendations at the earliest.

Lawyers of the opposition coalition claim that the government does not have any option except to implement the top-court order of releasing jailed political leaders.

Hisan Hassan, a leading lawyer for the opposition, said that Attorney General Mohamed Anil is delaying implementation on the pretext of evaluating the document – which the government claims to have “suspicious citations.”

She said that neither the government nor anyone else can deny freedom to anyone, and to do so would be a criminal offense. Such an act can be described as ‘kidnapping’ and a direct attempt to impede a court order, she added.

The  Maldives’ united opposition on Friday  filed a ‘habeas corpus’ motion at the Criminal Court in a bid to secure the release of jailed political leaders including the self-exiled former President Mohamed Nasheed.