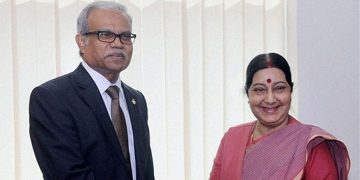 With India remaining unconvinced about the benign nature of the growing ties between the Maldives and China, the Abdulla Yameen government in the Maldives rushed its Foreign Minister, Dr.Mohamed Asim, to New Delhi earlier this week on a three-day visit to address New Delhi’s concerns in the best way it could, writes P.K.Balachandran in DailyFT.

Indian concerns about the geo-political consequences of the Maldives’ ties with China, especially after a path breaking Free Trade Agreement (FDI) was rushed through, and its joining China’s One Belt One Road (OBOR) global project, were apparently not assuaged by President Yameen’s recent public statements in favor of India.

Following the standoff over the sacking of three local body officials belonging to the opposition Maldivian Democratic Party (MDP) for meeting the Indian Ambassador without prior permission, Yameen had tried to patch up with India by describing India as the Maldives’ “closest ally”. He also appealed to the Maldivian media not to spread negative sentiments about India.

The Maldivian Ambassador in Sri Lanka Mohamad Hussain Shareef said that India need not worry about the Maldives turning to China for security as the country depends on India and Sri Lanka for its security “and none else”.

However, the bee in New Delhi’s bonnet currently is the FTA with China. This came out in a tweet from the Spokesman of the Indian External Affairs Ministry, Raveesh Kumar, on the meeting Foreign Minister Asim had with his Indian counterpart Sushma Swaraj in New Delhi on Thursday.

The tweet said that Asim and Swaraj had “productive discussions to strengthen the bilateral relationship, keeping in mind the India First policy of Maldives and India’s Neighborhood First policy. Asim also paid a courtesy call on Prime Minister Narendra Modi, the nerve center of power in India.

Yameen’s decision to send a special envoy to India also came in the context of mounting pre-election challenges from the Maldivian opposition, which is not only against the FTA with China in preference to an FTA with India, but is also against his general preference to China over India in all matters.

Yameen is to face a Presidential election at the end of 2018. The election is going to be crucial because the United Opposition led by the Maldivian Democratic Party (MDP) has the support of the international community because of its campaign to restore democracy, religious freedom and other Western values.

A spokesperson of the Maldives United Opposition described Yameen’s decision to send a Special Envoy to New Delhi as a “move to avoid direct interaction with his Indian counterpart, either forced by China not to, or he is too proud and big.”

While Male’s overall relations with Beijing is causing concern in New Delhi, the FTA is particularly worrisome. According to  Indian media reports, Maldives had promised to have an FTA with India first but this has been denied by the Maldivian envoy in India, Ahmed Mohamed, in an interview to Tribune India.  The FTA with China also gives China a head start over India in economic matters.

According to Ibrahim Athif Shakoor, the Maldives-China FTA is designed to spread the duty concession on imports from China over eight years with 70% of the tariff lines being made duty free immediately. Another 20% would be in in 5 years and a further 5% in eight years. Therefore, at the end of eight years, 95% of the items imported from China will receive full duty concession.

A further 5 % of tariff lines have been declared as “sensitive” and will not receive any duty concessions. The items declared sensitive by the Maldives include fishery items exported by Maldives, plastics, and road vehicles.

From day one, China offers full duty free status for 96.45% of the Chinese tariff line and the remaining 3.55% are items declared as “sensitive” and will not be offered duty free status.

The FTA has to be seen in the light of the fact that the Maldives has always been an import dependent country. For the last three years the difference between imports and exports of goods has been minus US$ 1.7 billion on an average. The current account deficit (taking into account the services sector) has been minus US$ 417 million in the period.

The imbalance is expected to go up drastically with the ambitious infrastructural development plans of the Yameen regime in conjunction with the FTA with China which will necessitate greater imports from that country.

As per customs statistics, Maldives imported MVR 29.1 billion of goods from the outside world in 2015 of which imports from China were worth MVR 2.2 billion; a 7% share of the imports. However, in 2016, the total import bill was MVR 32 billion of which Chinese imports were MVR 4.3 billion. This represented a 13.42% share of the import value; nearly doubling the share of Chinese origin goods from 2015. According to the 2018 budget, imports had increased tremendously in 2017, Shakoor points out. With the FTA imports from China would go up to 20% Shakoor says.

These increases had taken place prior to the FTA with China. With the FTA in place now, the imbalance will only gallop, though Chinese goods will be cheaper and affordable and purchasing them could lead to greater savings and investment in the Maldivian economy.

The Maldivian government argues that as a result of the FTA, Maldivian exporters will have greater access to the vast Chinese market. In 2015, the latest year for which official statistics are available, Maldives exported MVR 2.2 billion  goods to the world of which exports to China accounted for only MVR 535,000, a mere 0.02% of the country’s exports to the world. The average value of exports to China in the past three years for which exports statistics are available (2013-2015) was MVR 1.2 million, Shakoor points out.

Presently, exports of fishery products to China incurs a 15% duty. But with the FTA, Maldivian exporters would immediately, receive full duty- free access to the Chinese market.However, as Shakoor says, it cannot be guaranteed that the removal of the 15% tariff would make the Chinese market more attractive than alternative markets since other factors may also come into play.

The Maldives Monetary Authority (the Central Bank) and the IMF have raised concern about the perennial deficit and the, increase in the National Debt.

Finance Minister Ahmed Munavvar conceded that the debt is more than MVR 15 billion (U$$ 974 million).  He told parliament that, at the end of 2018, public debt would be around MVR 43 billion (US$ 2.7 billion) or 60 percent of GDP. The IMF and the World Bank predict Maldivian debt to reach 121 percent of GDP by 2020.

Meanwhile the Maldives Central Bank warned of dwindling national reserves as the rate of foreign borrowing increases. Governor Ahmed Naseer of the Maldives Monetary Authority (MMA) noted that the 2016 budget had projected a deficit of MVR 3.4 billion (US$ 220.7 million) while the actual deficit at the end of year was MVR  6.7 billion (US$ 435 million).

But funds borrowed for capital expenditure from China could cost a lot, and, as the Sri Lankan experience shows, Chinese funds could be  expensive though easily available.

In some of these areas, like urban planning, architectural services, management, marketing, HR and PR consultancy services are specific areas, Maldivian professionals are plying their trade and earning considerable income in the local economy. Local entrepreneurs are active and successful also in real estate investments and construction, safari boat sectors health and hospital services.

“The prospect of Chinese firms entering these sectors through the FTA, might shift the foundations upon which their feasibilities would have been built on,” Shakoor says.

The Maldivian President has said that his country will sign an FTA with India too. But Maldives finds India too slow to respond to opportunities, said its envoy in India, Ahmed Mohamed, in an interview to Tribune India.

“There are certain things that need to move faster [from India’s side], including FTA. On infrastructure developments, we have requests with India pending since the 2014 visit of President [Abdulla] Yameen. There are requests for which we need speedier processing,” Mohammed said.

(The featured image at the top shows the Maldvian Foreign Minister Mhammed Asim with his Indian counterpart, Sushma Swaraj)