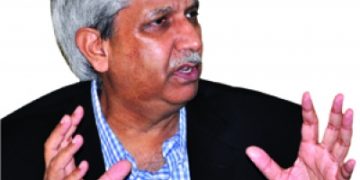 Love thy neighbor, even as a pretense, it helps

Love thy neighbor, even as a pretense, it helps Islamabad, September 30 (The News): Mathew 22:39. “Thou shalt love thy neighbour as yourself”. Except that both India and Pakistan are not largely Christian and therefore not bound by the second Commandment of the Bible. Their own respective denominations though are replete with the same sentiment about the ‘rights of the neighbour’, but for the moment only frenzy drives them.

Imagine, as India and its political leadership sounded the war-drums over Uri, they stood the farthest from any such possibility of affability for a relatively small neighbour, Pakistan. Sushma, that ebullient little package of power – originally from Lahore, now of Delhi – used her twenty minutes at the UNGA obsessed with only one issue at hand: how to isolate Pakistan as a terrorist state.

Not a word on how India envisions its future role in the complementary development of the world against the challenges which face mankind. Sushma, and hence India, could not rise, nay have never risen, above Pakistan. That is the Indian dilemma as well as its bankruptcy of thought and labour.

Pakistan is no better, mind you. They too are India-obsessed. If it were not serious it would be funny in how the resources of this nation have been put to fight a war that may just never happen, especially since nuclear parity of sorts has established itself as the dictating operational environment. And in how a little flexibility and a little tweak in carving reformulated objectives – without any reasonable compromise, mind you – could deliver far more complementary consequences for one of the poorest regions of the world.

The difficulty though is that each has the other as their fantasy object in both love and hate. In either case the sentiment never consummates to the fullest; and hence, the longing keeps the two ever mired in this state of unrealised infatuation. Just can’t get their eyes off each other. You understand the pun. As a consequence, both lose time, potential and capital, wasting opportunity that remains foolhardy enough to continuously revisit. These two just don’t give up.

Soon it might be all over, and the failure to move on with any positivity towards what else life, and thus geo-strategy offers means that these two nations remain in a strategic gridlock in capable of breaking the shackles of paralysis in thought and action. Soon, the sea of poverty and disease and anarchy and hunger will consume them all along with their bombs and notions of strategic equivalence. And opportunity will forever be lost on them.

You can only face one juggernaut a time – each other or the advancing cesspool of oblivion under multi-faceted adversity because of inattention to plight. Just as an example, the revised poverty index of $3.10 per capita, per day, places over 70 percent of India and over 40 percent of Pakistan in that category. Not that it ever fares into routine consideration anywhere.

But what do you do when the prime minister of India happens to be the cheerleader for war. He is a brilliant orator, but used this skill to churn a passion of hatred against Pakistan in his election campaign casting a future role for himself that shackles him in a mould. He thus rode a tiger to power and is finding it difficult to dismount it for fear of being devoured by the agitated animal.

Post Uri then, he has had two separate thrusts: first on teaching Pakistan a lesson through military riposte. That, when it came to, was gently weaned away as an option by his own military chiefs suggesting policy through other means, like looking to Ajit Doval and Co. In an environment of strategic equivalence (read nuclear balance, read mutually assured destruction), the space for irrationality has virtually evaporated. Now they can exercise muscles at each other from afar, but to actually grapple in arm-wrestling would be a slippery slope. Even Modi’s irrationality, contrived hopefully, needed tempering.

And now the latest fad of stopping waters to flow into Pakistani rivers as a thought-jiggler to a tiger-riding India by hawkish experts such as Brahma Chellaney et al, who in ringside cheering hope that newer heights can be touched in ‘hating thy neighbour’. The vacillating Modi on the one hand challenges Pakistan to reduce poverty and disease instead of fighting wars but then under the pressure of such venomous cohorts wishes to tamper with river waters. Even this horse had to be dismounted but they would just not let a thoroughly flustered Modi know.

And this is why: the World Bank is a guarantor of the Indus Basin Water Treaty that divides the rivers and their waters between India and Pakistan on a proportionate basis and geographical reality. The treaty is so complete and detailed that it even gives the amount for consumptive use within Kashmir; and for producing power by India on run-of-the-river projects that sometime will entail a limited pondage – clearly enumerated in the treaty – and tunnelling which will necessitate that the held water is fed back into the river in same quantity by India causing no loss to Pakistan.

This has kept the water-peace between the two neighbours. Even during active wars, the treaty was never abrogated. It is now being touted as a weapon instead in a time of no-war.

And the World Bank is no ordinary entity. Born out of Bretton Woods in 1944, as the last acts of the second WW were being played out, it was meant to organise a new global order retaining American eminence that had won the world its most devastating war. India is a willing partner to the order that has sustained since. To break out of its guaranteed dispositions is to fail the global order. A fledgling Indian presence on the world scene can ill-afford such transgression especially when it harbors global ambitions. It would be like walking out of the UN system.

And now this latest predilection to isolate Pakistan. Despite loud urgings, India ended up ensuring the Saarc Summit was postponed. A regional leader, once again, failed the system meant to integrate, cooperate and complement. This patently fails the mettle-test of leadership in challenging times.

The Indus Basin Water Treaty is binding. Period. Walking out of it is declaring war on the world, most surely on Pakistan. A nation surrounded by two nuclear neighbors, not one, can ill afford that.

It helps to recognize that all power has limits. And even absolute power remains viable when applied within those limits. Outside of those, and you are in the spectrum of diminishing returns. This is when one dismounts the high horse of power. Love thy neighbour – even as a pretence. It helps.