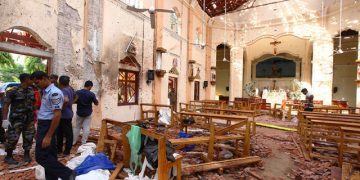 Colombo, April 23 (The Citizen): The Sri Lankan government said here on Monday, that the a local religious group, National Thowheed Jamaath, was behind the suicide attacks in Colombo and two other towns on Sunday in which 290 people, including 38 foreign nationals, were killed and more than 500 were injured.

“Since such a small local group could not have organized such wide-scale and deadly attacks, an international group was likely to have been involved”, cabinet spokesman Dr.Rajitha Senaratne said.

Addressing the media, Senaratne said that the “international support” angle is being investigated. Gvernment is trying to ascertain how the suicide bombers were prepared.

Suicide bombers had attacked the Shangri-La hotel, Kingsbury Hotel and the Cinnamon Grand Hotel, all within a short distance from each other on the arterial Galle Road in Colombo. Suicide bombers also struck the Kochikade church near the Colombo harbor, a church in Negombo, north of Colombo, and the Zion church in Batticaloa in the Eastern province. Subsequently, explosions took place opposite a reception hall near the Dehiwala Zoo outside Colombo, and in a house in Mahawila Gardens, Dematagoda, in the heart of Colombo.

After a meeting at the National Security Council on Sunday, the government deployed forces to protect all places of worship, tourist hotels, hospitals, embassies, catholic leaders and other important buildings.

The Secretary to the President, Udaya R. Senevirathna, said that a National Operations Center had been established to guide the investigations. About 1,000 soldiers as well as a large number of policemen have been deployed.

The police have arrested 24 persons, all locals .But their religious affiliations have not been revealed. The police said on Sunday that they suspected the involvement of a foreign organization but would be able to give concrete information on this only by mid-week.

There is a Sri Lanka Tawheed Jamaat, which propagates Wahabism. It is against Sufi practices which are common among Sri Lankan Muslims. It is closely linked to the Tawheed Jamaat in Tamil Nadu. Recently it launched a Sinhalese translation of the Holy Quran with much fanfare.

However it is not yet clear if the Sri Lanka Tawheed Jamaat is the same as the National Thawheed Jamaath.

The police say that on April 11, there was intelligence that the National Thawheed Jamath’s leader Mohamad Safran was planning a suicide attack. Government spokesman Dr.Senaratne said there were inputs from international intelligence agencies earlier warning of such suicide attacks.

A spokesman of the Indian High Commission that they had obtained some information about the impending attacks and had shared whatever intelligence they had with the Sri Lankan government.

The Sri Lankan government has since provided the Indian High Commission greater security.

On Sunday, Prime Minister Ranil Wickremesinghe told the media that a small local group could not have carried such a long series of bombings simultaneously without expert support from overseas. He promised to inform the public, after consulting the police, whether any organized group was behind Sunday’s attacks.

The Prime Minister, however, made it a point to stress that the while the police are investigating the case, civil society and the political class should attend to the need to preserve peace and communal harmony and not be carried away by rumors.

The government has already blocked Facebook. And Whatsapp has been disabled partially.

President Maihripala Sirisena has appointed a three-man commission under a serving Supreme Court judge, Vijth Malalgoda, to investigate the blasts and report to him within two weeks.

Meanwhile the police have located a safe house allegedly used by the terror outfit. They have seized a van and its driver involved in transferring the C4 explosive used.

Former President and Opposition Leader Mahinda Rajapaksa said that the attacks were the result of weakening the security under the current administration.

“We defeated brutal terrorists and ensured the safety of the people. But those who played a significant role in this, including intelligence officers and security forces personnel, have been harassed and demoralized. I blame the government for taking us back to the dark ages of fear,” Rajapaksa said.

The government announced on Monday that it is gazetting some of the clauses of the Prevention of Terrorism Act to tighten the law and order system.

The situation could have been worse if the 87 low explosive detonators found in the crowded Pettah market had been activated. Police have ordered a curfew between 8 pm on Monday and 4 am on Wednesday. All train services to the hill plantations country have been have been suspended.

Government on Monday also announced a grant of LKR 100,000 for the funeral of those killed in the blast and LKR 1 million to the next of kin,