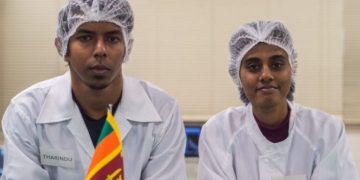 Tharindu Dayaratne is an electrical and electronics engineer of the University of Peradeniya and a research engineer at the Arthur C Clarke Institute for Modern Technologies in Sri Lanka. Dulani Chamika is a mechatronics engineer.

The satellite, which was designed and built at the Kyushu Institute of Technology in Japan, is 1000 cubic centimeters in size and weighs 1.1 kg.

But the launching has also brought to the forefront of Sri Lankan consciousness, Ravana (or Raavana), the ancient Lankan monarch who is known to have excelled in technology, aviation, medicine, state craft and music. It was but appropriate, that the country’s first indigenously designed satellite was named “Raavana-1”.

Ravana was related to the sky and flying. He is believed to have used a flying machine called “Dandu Monara” to carry him to the various parts of his vast empire which stretched way beyond the island.

The Dandu Monara or “Pushpaka Vimana” as it is known in India was also used to capture and whisk away Sita, Lord Rama’s consort. But as in India, in Sri Lanka also, Ravana is portrayed as a noble person who did not violate Sita’s modesty while in captivity. Again, as in India, Ravana is portrayed as an ardent Shiva worshiper and the composer of the Shivathandawa Stotra.

However, unlike in India, the Ramayana is not part of the mainstream Sinhala-Buddhist tradition. In fact, in the 15 th.Century, when Shiva and Vishnu worship gained popularity among Sinhala-Buddhists, alarmed Buddhist monks carried out a campaign against it and the Ramayana too.

Prof K.N.O. Dharmadasa, Editor of the Sinhala Encyclopedia,  mentioned a 15th century poet who ridiculed the Ramayana in his poems. The poet asked why Rama, a God, could not hop across to Sri Lanka like Hanuman did, and had to get a bridge constructed. “Could a God’s power be so small in this world?” the poet asked in mock wonder.

Be that as it may, ancient Sinhala works like Rajavaliya and Ravanavaliya, identified Ravana as a Sinhala king and extolled him as a great one. And through the tale of Ravana, the epic Ramayana was told to the people.

In his book Sakvithi Ravana (first published in 1988) the Sinhala cultural nationalist Arisen Ahubudhu says that Ravana reigned over Sri Lanka from 2554 to 2517 BC. He quotes Ravanavaliya to say that Ravana belonged to the “Sun race” as Ra signifies the sun and Vana signifies generation.

According to Ahubudu, Ravana’s ten heads represent the ten crowns he wore as a result of his being the sovereign of ten countries. Ravana’s ancestors are said to have ruled over what is now the Polonnaruwa district in North Central Sri Lanka. The name Polonnaruwa is said to be a derivative of the word Pulasthi, the name of the dynasty to which Ravana belonged.

Being a nationalist and the adherent of the Hela movement, Ahubudu trashed Valmiki Ramayana’s version that Rama invaded Sri Lanka because Ravana had kidnapped Sita. According to Ahubudu, Ravana’s step brother, Vibhishana, had invited Rama to invade Sri Lanka because he wanted to usurp the Lankan throne.

According to Prof Buddhadasa Hewavitharana, the Sinhalas disapproved of Vibhishana’s conduct. He said that in popular lore, the area to which he belonged to came to be known as the land of the Desha Shatru (betrayer of the country).

“The Ramayana may not be in the mainstream of the Sinhala religious culture. But it is very much a part of Sinhala folk lore. As children were told stories from the Ramayana to illustrate ideas of good and bad, the moral and immoral,” Prof. Hewavitharana had told this writer some years ago.

Noted playwright John de Silva had written the musical play “Ramayanaya Nurthi” which was staged at the Tower Hall Theater in Colombo in the early 1930s. Prof.J.B.Dissanayake and Namel Weeramuni had scripted a play on Ravana and Seetha named “Ravana Sithabhilashaya” which was popular. Recently, students of the University of Colombo staged a highly modernized and stylistically hybrid version of the Ramayana at the Nelum Pokuna which drew an appreciative audience.

Of course, in addition to all this, it is well known that there are places in Sri Lanka which are identified with the Ramayana, especially Ravana.

Sita Eliya in Nuwara Eliya district, where there is a South Indian style Hindu temple dedicated to Sita on the banks of a mountain stream, is adjacent to the place where Sita was confined by Ravana. Then there is a hill called Ravana Elle, which was supposedly the headquarters of Ravana.

In modern Sri Lanka, Ravana has begun to play a role in instilling pride in the island nation’s past achievements and faith in its future, at a time when the country is beset with problems of identity and there is a decline in faith in the capability of its existing institutions.

There has been a movement to revive Ravana as a cult figure, who represents Sinhala or Sri Lankan nationalism. For example, the Ravana Balakaya, is a Sinhala Buddhist nationalist organization. It was formed by a group of politicized Buddhist monks and laymen led by Ven. Ittekande Saddhatissa Thero.

Deborah de Koning of the Department of Culture Studies, Tilburg School of Humanities and Digital Sciences, says in a paper published in 2018, that Sri Lanka is currently seeing a process of  of “Ravanization”.  The Sri Devram Maha Viharaya in Pannipitiya near Colombo, founded by Ven.Sumangala Thero, specializes in deifying Ravana.

Indicating the Viharaya’s nationalist link, the 16 perch plot of land situated at Kotunna Road Pannipitiya on which the Devram Viharaya is built, originally belonged to Lt. Col. Sumith Dhammika Perera. But after he sacrificed his life at the battle front for the cause of Sri Lanka, the nation and Buddhism, his parents donated it to Ven.Sumangala Thero, says literature on the Viharaya.

De Koning notes that at the Viharaya, there are multiple conceptualizations of Ravana. But principally, they are Ravana as a healer and Ravana as a warrior.  “Conceptualizations from the broader Ravana discourse are ritualized in iconography, attributes, and sacred substances,” the sociologist says.

Two annual rituals for Ravana are organized by the Viharaya, namely, the Ravana perahera (procession) which concentrates on Ravana’s martial side, and the Maha Ravana nanumura mangalyaya, which focuses on healing, his benevolent side.

Dinesh Subasinghe, a young Sri Lankan musician and composer, has been trying to popularize the “Ravanahatha”, a violin-like small instrument that Ravana had devised and played.

The Ravanahatha is made out of a coconut shell and bamboo, with horsehair or a natural fibre serving as the string. Goat or sheep gut and coconut wood are also used. Having been the first stringed instrument to be played with a bow, it is recognized as the world’s first violin.

“Ravanahatha” or “Ravana’s hand” is mentioned in the Ramayana,” Subasinghe claims. Its plaintive sound, resembling the Esraj of North India, is said to have moved Lord Shiva to grant Ravana a boon.

“The Ravanahatha was picked up by Hanuman and flown to north India, where it is still played in Rajasthan and in Uttar Pradesh,” Subasinghe said.