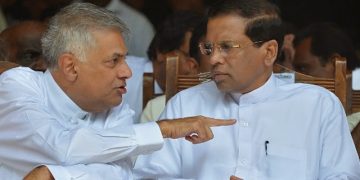 Colombo, January 23 (newsin.asia): Sri Lankan President Maithripala Sirisena has appealed to all Lankans, including Prime Minister Ranil Wickremesinghe, to support the legal process to punish those who are involved in the Central Bank fraud.

Speaking at a Sri Lanka Freedom Party (SLFP) local bodies’ election rally in Kandy on Monday, Sirisena said the battle against corruption in 2018 is like the titanic struggle against the British 200 years earlier in 1818 (called th Uva Rebellion).

Calling for national unity in the current struggle against corruption, the President said people should shed their differences and make him “strong and not weak”.

President Sirisena went on to say that SLFP members blamed him when he left the then government headed by President Mahinda Rajapaksa in 2014. And now, United National Party (UNP) members are saying that that he is betraying them.

“But I did not betray anyone. I was only working against corruption, theft, waste, and autocracy,” Sirisena asserted.

He then referred to former President Rajapaksa’s description of him as a “failure” and said that it is Rajapaksa who has been a failure.

“Even though there were two years left in his term, he (Rajapaksa) called for fresh elections due to his inability to face the economic problems caused by heavy loans. He failed in the 2015  parliamentary elections as well,” the President recalled.

“The former leader who shouts from roof tops about the Central Bank Bond Commission Report, did not come to parliament to vote against Ravi Karunanayake ( a Minister accused in the band scam case) when there was a no confidence motion against him. Instead, he telephoned Karunanyake and wished him luck,” Sirisena pointed out.

It must be understood that the bond commission had said that huge frauds had happened since 2008, when Rajapaksa was in power,  the President added.

Sirisena said that while the opposition is saying that Sri Lanka will be divided and sold to foreigners by his government, the truth is that it was the Rajapaksa government which had planned to sell 240 acres to a Chinese company to build the Colombo Port City. The previous government had sold six acres belong to the army headquarters to the Chinese hotel Shangri-La thus taking away “land of the great war heroes.”